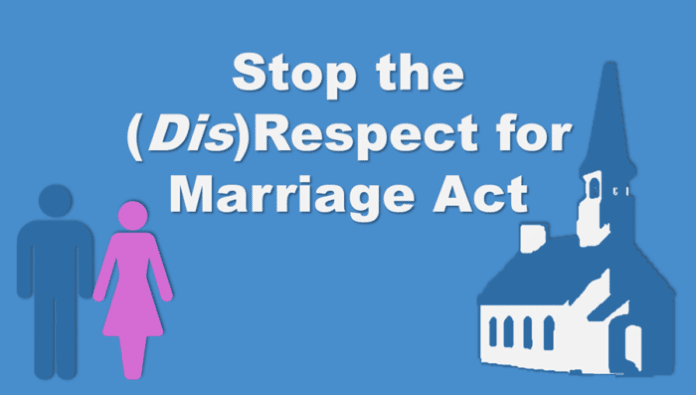 URGENT; ACT NOW: On Monday, November 21, the U.S. Senate will vote on an amendment, sponsored by Sens. Collins and Tammy Baldwin (D-Wis.), to the pro-LGBTQ “marriage” and misleadingly-titled and “Respect for Marriage Act” (H.R. 8404). Senator Baldwin and Collin’s amendment allegedly protect religious freedom. However, this amendment is very weak and would do nothing to prevent homosexual activists from harassing those who disagree with their extremist views.

Republicans should never compromise on such a blatantly unconstitutional and anti-religious freedom bill. Even with the amendment, it is merely be a first step down the slippery slope toward additional changes that infringe on the First Amendment and promote a radical “LGBTQ” agenda.

On Wednesday, the Senate voted 62-37 to invoke cloture on H.R. 8404, the misleadingly-titled “Respect for Marriage Act.” Twelve Republicans voted with all 50 Democrats to advance the bill! Those senators are:

Because of these 12 Republicans, H.R. 8404 broke the filibuster and can pass with a simple majority!

It is imperative that you contact your U.S. representative and senators in opposition to H.R. 8404/S. 4556, and also urge them to oppose every other bill that is unconstitutional or is antithetical to our constitutional Republic’s values.

STOP THE (DIS)RESPECT FOR MARRIAGE ACT!

Your Friends in The John Birch Society

Get Citizens Journal Bulletins Free!
Donate to Keep Us Publishing!
Share
Facebook
Twitter
Pinterest
WhatsApp
Previous article
Could This Democrat End up Certifying Her Own Election Win?
Next article
America, The End and Our Hope (November 12-18, 2022)