The Myth of the ‘Gay Conservative’ 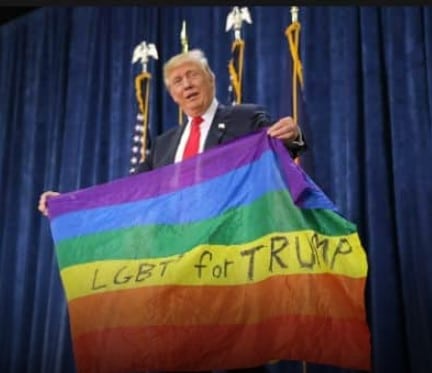 By definition every self-identified or self-declared homosexual is either deceived, a deceiver or both. The truth about human sexual identity is manifest in every person’s body: you’re either male or female with self-evident complementarity to the opposite sex. Yes, some people have a birth defect that causes them to have two sets of genitalia (one if which is almost always incomplete), just like others are born with a hare-lip, six fingers or are co-joined as twins – but such cases are rare exceptions that prove the rule. In my wild liberal youth I once dated a girl who had two overlapping nipples on one breast (the other was normal). It was an intriguing oddity but a clear abnormality. There is no “third sex” only the reality of binary heterosexual physiology – and everything about human sexuality originates in and is premised upon that fact.

We are ALL heterosexual beings with the capacity for engaging in all forms of sexual conduct (limited only by morality and opportunity), and we never stop “being” heterosexual just because we decide or declare ourselves to be something else based on the voluntary behavioral choices that we make, no matter how strong the temptation to indulge in those behaviors may be.

Now, there are various reasons someone might perceive themselves as non-heterosexual when they reach the age that such issues become relevant to them. In my study of gender identity disorder, those factors are nearly all if not exclusively psychological in nature, relating to a very young child’s perceptions of his or her actual or surrogate parents. Simply put, in toddler-hood a child first begins to differentiate maleness and femaleness in adult care-givers and ponders which type he or she is. If, for example, Daddy is a violent drunk or is never home, a little boy might decide to model himself on Mommy – a choice that has no sexual implications at that time, but does later when pre-pubescent ideas about pairing with the “opposite” sex get confused because of then-ingrained habits of personality, socialization and expectation.

At any stage of development, even adulthood, gender identity disorder is a reparable condition as the ex-“gay” movement has proven time and again. That fact is so threatening to the LGBT political agenda that it has spent billions of dollars and millions of journalistic “man hours” trying (largely successfully) to criminalize reparative talk-therapy and demonize the very notion of heterosexual reorientation: all while simultaneously insisting on absolute self-determination for even very young children who (under the guidance of LGBT teachers and community activists) declare themselves “transgender” and demand extreme “medical assistance” to transition. The cognitive dissonance in this contradiction is, literally, psychotic/demonic.

In any case, there is really no such thing as a “homosexual” in the sense of being designed by God or nature to exclusively function contradictorily to one’s physiology. Despite their best efforts and massive funding over many decades, pro-LGBT scientists have failed to come up with any objective test to prove homosexuality is anything other than a state-of-mind. To this day there is no way for anyone to know conclusively whether a newborn or pre-born baby will be “gay” in adulthood – meaning all of the relentless propaganda that “gays” are “born that way” with no hope of recovery is a gigantic steaming pile of steer manure.

Sure, there are many self-identified/self-declared “gays” who honestly believe they are born that way – but their self-perceptions about their sexual identity (starting in mid-childhood or later) arise long after their orientation was misdirected by environmental factors in early childhood. And even if that were not true and there were some genetic basis for same-sex attraction disorder (SSAD), all sexual conduct except rape is voluntary. If the all-too-common inclination toward heterosexual promiscuity can be controlled, for example, by married people, why is it assumed that homosexuals have no choice but to indulge themselves in same-sex relationships?

And if we create a social right to sexual lifestyles based on inclinations and temptations for “gays,” how can we prevent that logic from normalizing the relationships of “Minor Attracted Persons” (MAPs) with a generation of children newly granted total self-determination in sexual matters (unless, of course, they want to “go straight”)? We can’t, and that very cutting-edge frontier has become the new Shangri La of the sexual revolution – though it has been the goal from the very beginning: “the repeal of all laws governing the age of sexual consent” being Demand No. 7 to the American states in the landmark “1972 Gay Rights Platform” of the first national conference of (200) LGBT organizations – a demand that has never to my knowledge been repudiated by any homosexual leader over the past half-century.

On the other hand, many other SSAD sufferers (a majority, I believe) know full well they aren’t “born that way” (having “become gay” only after experiencing sexual trauma or grooming by an adult or older child).

Thus, every “gay” is either deceived or a deceiver or both, meaning that anyone working to normalize homosexuality in society is furthering a false narrative wittingly or unwittingly. False narratives are the stock-in-trade of the progressive movement, especially when they relate to the sexual revolution, which is the core strategy of Cultural Marxism for overthrowing Judeo-Christian civilization. ANYONE who adopts the label of “homosexual” is serving the cause of the political left, no matter how much they might otherwise align with conservatives on social issues, even LGBT issues, because they are denying the reality of their own creation by God as a “heterosexual” and affirming the lie that a person’s sexual choices irrevocably define him or her.

There is no such thing, therefore as a “gay conservative.” If you claim “gayness,” you are both a liar and an insurrectionist against God’s natural order and His model for civilization.

The closest one can get to being a legitimate “gay conservative” is admit to himself or herself that one’s struggle with same-sex attraction disorder (no matter how difficult that struggle has been) is a condition, not an innate identity, and one’s eventual reorientation to heterosexual normalcy would be the best resolution to one’s situation. A struggler of this type, who can abide by a policy of “Don’t ask, don’t tell,” should be fully welcomed into, and be fully protected from “outing” by the conservative movement. I have known and worked with numerous such individuals over the years. The shorthand for this recipe for inclusion is “MYOB, not LGBT!”

Telling outsiders to “mind your own business” about private sexual lifestyles as a matter between you and God is the only truly conservative posture. Affirming the false presuppositions of LGBT ideology by publicly calling yourself “gay” always serves the “progressive” agenda and defies God’s agenda.

Scott Lively is an attorney, pastor, human rights consultant and missionary with service in more than 50 countries. He is the author of eight books including “Redeeming the Rainbow,” a textbook on pro-family advocacy and opposition to the LGBT agenda, and his most recent work “The Prodigal Son Prophecy: God’s Amazing Plan for the Restoration of the Two Hebrew Houses and the Salvation of the Gentiles.” All of Scott’s books are offered freely in PDF and/or video form at his website https://www.scottlively.net/subscribe/. He can also be reached by email at [email protected]

The views and opinions expressed in this commentary are those of the author and do not necessarily reflect the official position of Citizens Journal Florida. We’re sure this one will be very controversial and welcome civilly-worded responses.