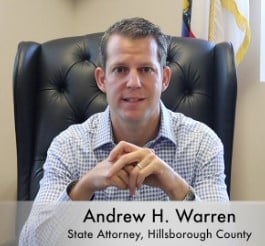 Early Friday morning, State Attorney Andrew Warren levied his own attack on DeSantis. Warren, who was suspended by DeSantis in early August, says that the suspension overturned his elected position in the following tweet……

…. As The Floridian previously reported, DeSantis suspended Warren for “neglect of duty” and “incompetence.” This suspension came shortly after Warren stated his refusal to prosecute individuals who violate Florida’s new 15-week abortion ban. Additionally, he would not enforce the prohibition on “gender-affirming care” for minors. Recently, Warren has filed suit against DeSantis to get his job back.

Read MORE in the Floridian