She Nailed It! Knocks it Out of the Park 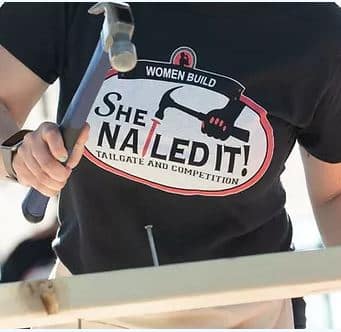 By Nassau Habitat for Humanity

Nassau Habitat for Humanity Month ends with a bang as 30 teams compete to win the coveted hand-painted hammers and the prize of Highest Fundraising Team. Nearly 300 people attended the October 23rd at Mocama Brewery and the New South Food Truck Park. All fundraising goals were exceeded!

Participants enjoyed delicious food and beverages, a silent auction, raffles, and a fierce hammering competition on the Fernandina Pirate’s Club ship (stage). The event culminated in the three teams with fastest time taking home a one-of-kind hammer trophies donated by Turner ACE Hardware and decorated by the Shady Ladies Art Studio. In first place were the Pickett Pounders (sponsored by Pickett Construction). Second place went to Keeping it Real-l-ty (sponsored by Amelia Coastal Realty) and third place to the Rotary Club of Fernandina Beach.

To enter the competition each of the 30 teams agreed to raise a minimum of $1000, but they did not stop at minimum they reached for the stars. The Highest Fundraising Team, Pickett Pounders, raised over $6,600.  There was a photo finish for the next three spots with Newcomers Hammer Time and Buchanan Builders barely edging out First Presbyterian Church Staff – each team raising nearly $6000. Other awards included Most Spirited Team, the Silver Rappers, and the Bravest Rookie Team (slowest time) awarded to 4 the Arts by the Story and Song Center.

Special thanks were given to the She Nailed It! Judges: Dr. Kathy Burns, Commissioner John Martin and Mr. Adam Kaufman and Emcees Mr. John Drew and Commissioner Bradley Bean.

Proceeds from the 50/50 raffle will go to fund Habitat Florida’s efforts in the rebuild after Hurricane Ian. All proceeds from the event will go to help build three homes on Elm Street this year. Please visit the Nassau Habitat website for more information on She Nailed It! and how to donate.