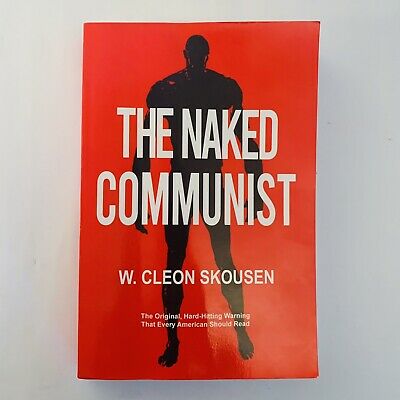 A book written in 1958 explains our current cultural upheaval.

My father was a liberal Democrat. He worshipped FDR and didn’t care much for the GOP. His parents were staunch Republicans, and the political discussions I remember from the 1950s were always entertaining – if not a bit confusing – to this eight-year-old. Importantly, while my dad was a liberal, he was a virulent anti-Communist, who saw them as evil as the Nazis he went to war to eradicate.

The reasons my father hated the Communists are neatly spelled out in The Naked Communist, a book written in 1958 by political theorist W. Cleon Skousen, who eerily predicted our current state of affairs. In a section titled “Current Communist Goals,” he elucidates the plan in 45 steps, explaining that “many loyal Americans are working for these same objectives because they are not aware that these objectives are designed to destroy us.”

Skousen is especially insightful on the cultural and educational strife we are now experiencing. For example, in Step 20, he writes, “Infiltrate the press. Get control of book-review assignments, editorial writing, policy-making positions.”

While there certainly is a conservative media, is there any doubt that the predominant mainstream media runs far left? A good example of press manipulation was the ongoing reference to the George Floyd riots – where there was mass violence and 164 structure fires from arson in a four-day period in 2020 – as “protests.” Another was the complete suppression of the Hunter Biden laptop story, which may very well have altered the outcome of the 2020 presidential election.

Step 24: “Eliminate all laws governing obscenity by calling them ‘censorship’ and a violation of free speech and free press.” In a similar vein, Step 25 reads, “Break down cultural standards of morality by promoting pornography and obscenity in books, magazines, motion pictures, radio, and TV.”

Compared to what we have now in films, TV and music, Playboy and the ravings of Lenny Bruce in the 1950s seem Church-worthy.

In Step 30, Skousen foresaw the current mania to deny the greatness of George Washington and other iconic Americans who don’t toe the utopian party line. “Discredit the American Founding Fathers. Present them as selfish aristocrats who had no concern for the ‘common man.’”

Skousen is especially on-target when he presaged the Marxist infiltration into the education sector. Step 17 asserts: “Get control of the schools. Use them as transmission belts for socialism and current Communist propaganda. Soften the curriculum. Get control of teachers’ associations. Put the party line in textbooks.”

Clearly Critical Race Theory, with its Communist roots and Black Lives Matter (whose co-founder Patrisse Cullors described herself as a trained Marxist) is alive and well in many of our nation’s schools. All too often “readin’, ritin’, and ‘rithmetic” have been replaced by “repression, rebellion and revolution.” Textbook companies follow the educational zeitgeist simply because they want to sell au courant books in order to keep their bottom line healthy.

As for the teachers unions, there is certainly the stench of Marxism. We all must realize that no matter their rhetoric, teachers unions are not beneficent organizations that care about children, their parents, taxpayers or quality education. They are ruthless special interest groups that will stop at nothing to advance their agenda. The National Education Association playbook was adapted directly from Marxist community organizer Saul Alinsky, who was hired by the union as a trainer in the 1960s. John Lloyd, an NEA insider at the time, explained that to understand the union, learning about Alinsky is a must. Reading Rules for Radicals, will help one “understand NEA more profoundly than reading anything else,” he said, because the organization was modeled on Alinsky’s precepts, which the union used to train its staff.

The Alinskyite model is perhaps best typified by Cecily Myart-Cruz, the socialist leader of the United Teachers of Los Angeles. In 2021, when was asked about how her union’s insistence on keeping L.A.’s schools locked down for over a year may have impacted the city’s k-12 students, she insisted, “There is no such thing as learning loss. Our kids didn’t lose anything. It’s OK that our babies may not have learned all their times tables. They learned resilience. They learned survival. They learned critical-thinking skills. They know the difference between a riot and a protest. They know the words insurrection and coup.”

Step 28: “Eliminate prayer or any phase of religious expression in the schools on the ground that it violates the principle of ‘separation of church and state.’”

Prayer in school was banned a few years after Skousen predicted its demise. Our Lady of the Marxist secular religion is prospering, however.

Step 38: “Transfer some of the powers of arrest from the police to social agencies. Treat all behavioral problems as psychiatric disorders which no one but psychiatrists can understand or treat.”

Police now are out of favor. Typical is the Los Angeles Unified School District which cut 133 or about 40% of its school cops in favor of kinder and gentler “climate coaches” in 2021. It was also decided that police would no longer patrol campuses, and would only be called upon to respond in-person during emergencies. “Restorative justice” and other similar non-consequences for willful defiance and worse have become the norm. As a result, discipline suffers and a few disruptors can make life miserable for behaving students and teachers alike. It turns teachers and counselors into therapists, emphasizes “making the victim and offender whole,” and involves “an open discussion of feelings.”

Clearly, Skousen hits the bull’s-eye here. The area of sex and gender is especially vexing. While God has been banned, schools see fit to tell your boy he may be a girl trapped in a boy’s body, and can change his school identity and hide it from the parents.

On the national level, the Biden administration is pushing to redefine “sex” in the Title IX rules to include “gender identity.” In reality, the change would threaten one of the basic principles of American society: that parents, not the state, are the primary caretakers for children. With the proposed change, the country is poised to compel school districts to treat students as the opposite sex, without their parents’ knowledge or consent. Even without federal help, many states are pursuing a similar anti-family path on their own.

In New Jersey, “there is no affirmative duty for any school district personnel to notify a student’s parent or guardian of the student’s gender identity or expression.”

In California, state law provides that “instruction or materials that discuss gender, sexual orientation, or family life and do not discuss human reproductive organs and their functions” are not subject to parental notice and opt-out laws, according to The California Safe School Coalition. Also, at a California Teacher Association conference in October 2021, teachers were advised on “best practices for subverting parents, conservative communities and school principals on issues of gender identity and sexual orientation.” Additionally, since 1997, the state even permits girls to be excused from school to get an abortion without any parental notification whatsoever.

A school in Wisconsin recently hung up a poster which proclaimed, “If your parents aren’t accepting of your identity, I’m your mom now.” And in a similar vein, at the 2022 Teacher of the Year ceremony hosted by the White House, President Biden claimed that school children don’t belong to parents when they’re in the classroom. “They’re all our children. And the reason you’re the teachers of the year is because you recognize that. They’re not somebody else’s children. They’re like yours when they’re in the classroom,” he said.

Had Biden said that 60 years ago, it may not have been controversial, but these days, his words are frightening.

Karl Marx once stated, “The education of all children, from the moment that they can get along without a mother’s care, shall be in state institutions.”

The long march Marxist through the institutions is continuing at breakneck speed. Had my father been alive to see what’s going on now, he’d think we live in a totalitarian state. In fact, maybe we do.

Larry Sand, a former classroom teacher, is the president of the non-profit California Teachers Empowerment Network – a non-partisan, non-political group dedicated to providing teachers and the general public with reliable and balanced information about professional affiliations and positions on educational issues.