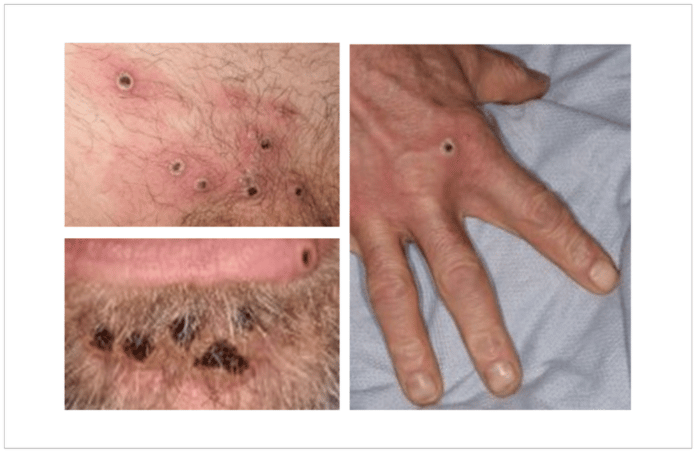 Is the monkeypox scare narrative already beginning to crumble?

Even the skin contact that is involved in sex, the experts say, is far less a factor than the sex itself.

This new opinion is based on an increasing pool of evidence that includes three studies published in peer-reviewed journals (see here, here, and here), as well as widely circulated reports.

The ramifications of the evidence are immense, as knowledge of the disease’s transmission forms the basis for developing guidelines and policies to counteract its spread.

“A growing body of evidence supports that sexual transmission, particularly through seminal fluids, is occurring with the current MPX outbreak,” Dr. Aniruddha Hazra, medical director of the University of Chicago Sexual Wellness Clinic, told NBC News in reference to studies that found the monkeypox virus in semen.

As a result of the new insights, scientists told NBC News that the Centers for Disease Control and Prevention (CDC) and other health authorities should accordingly update their resources to emphasize the crucial role in transmission played by the sexual relations of homosexual and bisexual men.

Dr. Jeffrey Klausner, an infectious disease physician at the University of Southern California, is one of these growing number of voices. On August 14, he, along with Dr. Lao-Tzu Allan-Blitz (a global-health resident physician at Boston’s Brigham and Women’s Hospital), published an essay on Medium reviewing research that indicates homosexual sex is primarily how monkeypox is being transmitted.

“It looks very clear to us that this is an infection that is transmitting sexually the vast majority of the time,” said Allan-Blitz.

While some other experts did not express that same level of certainty, they were at least willing to admit that monkeypox is more readily spread through intercourse.

Dr. Paul Adamson, an infectious disease specialist at the UCLA School of Medicine, said, “I’m not sure we can say it is primarily the sexual transmission and not the skin-to-skin contact that also occurs during sex that is contributing to the most transmission during this current outbreak. However, emerging data seem to suggest that monkeypox might be more efficiently transmitted sexually.”

First, he noted that, according to the WHO [World Health Organization], more than three quarters of global monkeypox cases are among men 18 to 44 years old. This is a typical age breakdown for diagnoses of sexually transmitted infections among gay and bisexual men, he said. What’s more, in recent studies of pooled monkeypox cases among this demographic, 17% to 32% of those diagnosed with the virus received a sexually transmitted infection (STI) diagnosis at the same time.

Second, during the global outbreak, atypical to what has historically been seen in the 11 African nations where the virus has become endemic since first being identified in humans in 1970, monkeypox lesions have in the majority of cases occurred in men’s genital and anorectal areas. This … suggests that these were the sites where the virus first passed into the body.

In addition, Klausner said, scientists have found a connection between specific sex acts and the appearance of monkeypox lesions.

By contrast, only seven percent of the men who had homosexual sex but did not engage in “bottoming” developed proctitis.

Furthermore, 95 percent of the men with tonsillitis said they had performed oral sex on another man.

Thus far, the mainstream media and scientific community have played down the notion that monkeypox is mostly being spread by the gay community. Is this out of a desire to “protect” the image of the LGBT world? If so, how much longer will they be able to do so in the face of mounting scientific evidence countering their narrative?