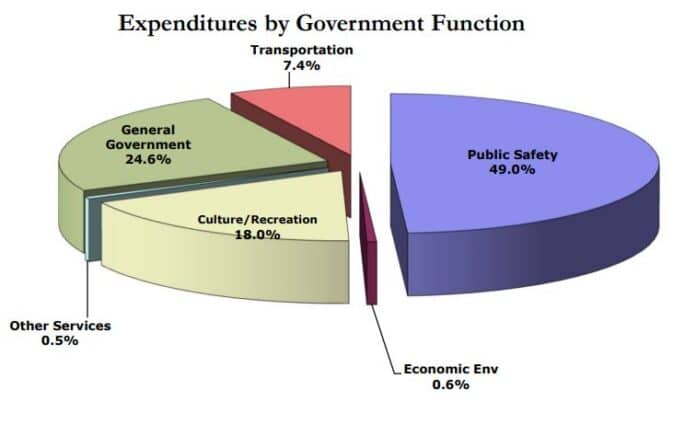 Inflationary trends loom as an animating force for fiscal planners at Fernandina Beach City Hall, based on documents released earlier this week.

The proposed annual budget summary is an 80-page tome of pie charts, spreadsheets and line items that could bring a squint to the eyes of the most ardent CPA. But the immediate takeaway reveals city planners expect fiscal year 2023 revenues to increase by about 10%, even with the millage rate holding steady at the 2022 rate of 5.333 mills. Here is a link to the budget summary.

Property tax revenue projections estimate receipts in the year ahead to be $17.6 million, up from $15.4 million, thanks to an estimated 14% increase in property values within the city’s taxing district, explains City Manager Dale Martin in a 2-page summary memo at the start of the extensive budget document. City planners expect a collection rate of 96%, the same as the current year.

“While the cost of living (+7.0%) and market values of properties (+14.0%) continue to significantly rise”…provisions of Florida state law “limit the increase of “homesteaded” (principal residence) properties’ assessed value to only 3.0%,” the memo continues.

“Owners of a “homesteaded” property limited to the 3.0% increase will pay approximately an additional $16.00 per $100,000 of Taxable Value. For a homestead property with an Assessed Value of $300,000, the increase is approximately $50” more than the previous year, Martin writes. By comparison, “non-homesteaded properties will pay an additional $37.00 per $100,000 of Assessed Value” in the current proposal.

Based on the table below, a rollback rate reduction to 4.771 mills would keep estimated property tax revenues virtually unchanged at $15.7 million in FY 2023. An adjusted rollback of 5.063 mills would see estimated property tax revenue climb to $16.6 million. The final scenario listed on the table below begins with a bump in the millage rate to 5.570 mills for an income stream of $19.1 million from property owners.

“For the first time in six years, the City’s water and wastewater fees will increase modestly,” Martin states but does not specify the amount of the increase in his memo. (More to follow in another report.)

The pandemic is tagged as driving costs upward, Martin states. “Higher expenditures are primarily the result of national, state, and regional economic factors: the increased costs of labor, equipment, and materials following the Covid pandemic.”

Overall, the city’s budget total is put at $195.3 million, with a third of that amount coming from reoccurring activity “associated with trust and agency funds, the memo explains. With these funds set aside, the 2023 budget estimate totals $124.6 million, up 12.5% from $110.8 million estimated for the current budget year.

“The portion of the proposed budget that typically draws the most interest is the General Fund, which is the primary operating fund for the City, and principally financed by property tax receipts,” observes the city manager in his opening memo. But what may surprise many residents is this is actually less than 40% of the overall spending plan. The proposed General Fund expenditures total $25,910,546 an approximate increase of 10% over FY 2022,” the city manager states.

Pie Chart Summary of Component Funds Within the Budget

Below is a breakdown of revenue sources flowing into the General Fund for fiscal year 2023. The Latin phrase “Ad Valorem” refers to funds from property taxes.

Roy M Postel
Roy M Postel is a resident of Fernandina Beach ("off Island"). He is a general assignment Citizens Journal Florida reporter with a keen interest in politics and history. He loves to investigate tips from fellow citizens. Contact him at [email protected]
RELATED ARTICLES
News