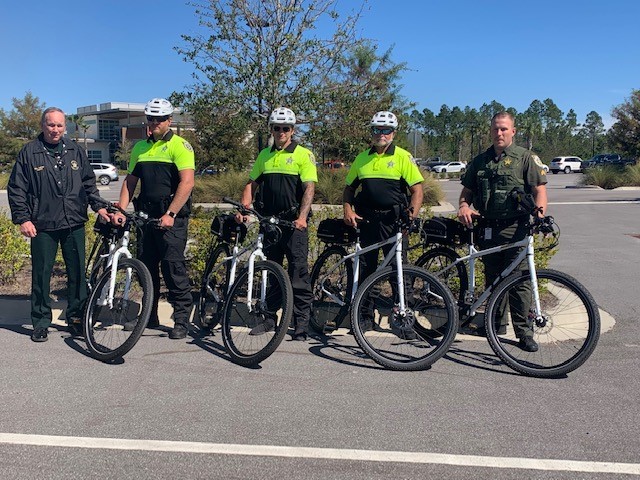 On Wednesday October 19, 2022 NCSO officially “rolled out” it new Bicycle Unit in the Wildlight community. Over the summer these deputies had the chance to train with the Jacksonville Sheriff’s Office to get familiar with using a bike while on patrol.  The Bicycle Patrol Unit consists of Special Operations/Community Affairs Deputies. The Unit will be used to occasionally patrol bicycle paths and trails around Nassau County and will also be used for special events. The use of a patrol bicycle allows deputies to become more mobile, visible, and approachable to members of the community. Thanks to a generous donation of nearly $9,000 from Friends of Amelia Island Trails, the sheriff’s office was able to purchase 4 bikes and important safety equipment such as helmets and blue lights.

“We appreciate the partnership with Friends of Amelia Island Trails for allowing us the opportunity to serve our community in a new way and to allow our deputies the ability branch out in new areas our patrol vehicles just don’t have access to,”  Sheriff Bill Leeper Said.

P.S. More pictures and videos to come on Facebook!