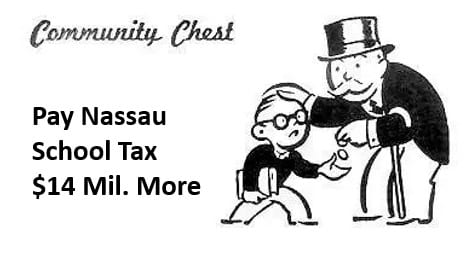 Nassau County voters narrowly approved a school district referendum enacting a 4-year
property tax during the November 8 midterm election, to largely benefit the county’s
statistically underpaid teachers. The funds will also be applied toward school arts,
athletics and safety/security. While paying local teachers more could go a long way
toward increasing retention, some feel the pay raise could have been provided without
the added tax on homeowners.

The referendum needed just 50 percent plus one vote to pass, and according to the
county’s Supervisor of Elections website, it passed with a 53% – 47% margin… a close
spread considering the conservative leaning county demographics.

“I know some very conservative people who were for the tax, because they felt that the
absolute need to increase teachers’ salaries outweighed other considerations,” Richard
Lamken, Interim Schools Lead for Nassau County’s County Citizens Defending
Freedom (CCDF), told Citizens Journal. Lamken, however, opposes the referendum.
“People like me were against it primarily because I believe there is money to be
apportioned for salaries that is not being used wisely,” he said. “The district has refused
a citizens’ oversight committee to be constituted… they’re not all that transparent,” he
added.
The tax that voters approved, specifically, is a 1 mill property tax increase for
homeowners. It equates to $1 per $1,000 of a home’s assessed value, minus a $25,000
Homestead Exemption. So a $400,000 home will generate a new tax of $375 per year for a estimated total of nearly $14 million annually.

According to the Nassau County School District, funds will be applied as follows:
70% – Teacher/Support Personnel Salaries
9% – Arts
9% – Athletics
12% – Intervention & Safety

The tax is one possible solution to a problem that most people agree exists. “Hardly
anyone disputes that the local teachers are underpaid,” Citizens Journal Publisher
George Miller said. “In fact, the turnover rate here is amazing,” he added, referring to
the comparatively very low retention rate for local teachers. According to the county’s
school district website, half of the teachers have been teaching in their school for less
than three years. That’s about double the statewide average.
To explain the low retention rate of local teachers, Nassau is 40th out of 67 Florida
counties when it comes to teacher salaries, and Florida is 48th out of 50 states for
overall teachers’ salaries.

Echoing Lamken’s sentiments, however, Miller also voiced his opposition to the new tax.
“A lot of people think that with a quarter of a billion dollar budget ($258 million) for only
12 thousand students, that they could find the money for the teachers’ increase by some
other method than raising taxes still further,” he said. Miller also added two other
important perspectives to the debate; that taxes have de facto gone up every year
already due to the rapid appreciation of local real estate values, and that the new tax
represents a significant increase of the school tax portion of the county tax.
So with a seemingly healthy budget even before the new tax (simple number crunching
rings up $21,500 per student), why are county teachers being paid as little as they are?
Lamken has been trying to uncover the budget mysteries of Nassau County for some
time, with little success so far.

“Why was last year’s budget $7000, and this year’s
budget $75,000, for the same line item?,” he asked. They apparently told him, a former
Superintendent of Schools in California, that it was a “place holder,” and they had no
supporting documents to explain their unexplained budget increases.

Kevin Harris is a reporter, editor and journalist, previous President of Cal State
Northridge’s Society of Professional Journalists, having worked for the LA Times and
Newhall Signal. He is now also a musician and videographer, and splits his time living
outside of Salt Lake City, Ventura County, CA, and South Florida.