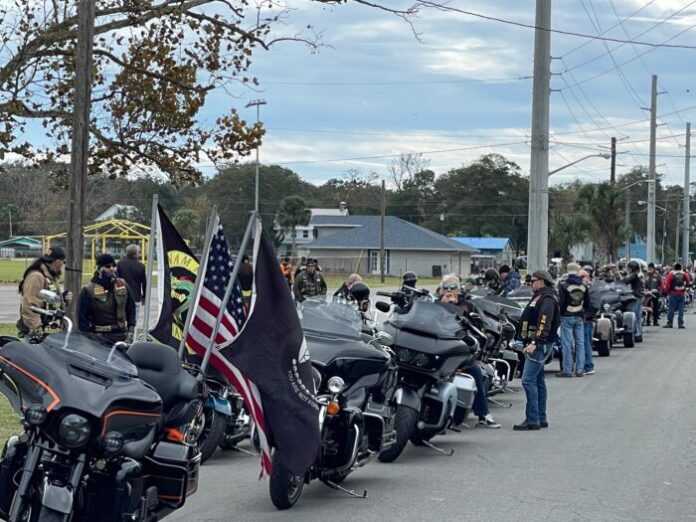 On Saturday we spotted many, many motorcycles lined up outside of Central Park in Fernandina Beach. They were Nam Knights members staging to start their “OJ Run” which would take them through the city, over the bridge to parts on their itinerary. It seems that motorcyclist veterans organization event sponsor ‘Nam Knights was doing this for fun, fellowship and fundraising for the Nassau County Sheriff’s Office and Fernandina PD programs for kids at risk. $5,000 checks were given to both organizations for this purpose. Nam Knights honors vets and police officers who have lost their lives in service and assists vets and police officers in their time of need. More about their event on the Westside Chapter Facebook page.

The Nam Knights Motorcycle Club (NKMC) began in the summer of 1989 as a small group of Harley-Davison riding combat Veterans of the Vietnam War, who were also Police Officers.  The club was founded by Jack Quigley, now retired Undersheriff of the Bergen County Sheriff’s Department in New Jersey. To quote Jack, our founder, “The club was formed to recapture the brotherhood its founding members shared while serving in Southeast Asia, and to help other veterans of all wars who are unable to physically or financially help themselves.”

Since that time, the Club has grown to 78 Chapters in 18 states, Washington D.C., and one Canadian province, with hundreds of members that comprise veterans of all eras, as well as Law Enforcement personnel, plus a special dedicated number of patriot members.

Over the past 13 years, members of the NKMC from all over the country have gathered the weekend prior to Thanksgiving for what they affectionately call the annual OJ Run.  The run began ostensibly as an informal gathering for brotherhood and camaraderie.  Several years ago, First Coast Chapter President Jim “DC” Leimbach, based in Fernandina Beach, broached the subject with several other members about raising money for the local Shop With A Cop program.  The program seeks to provide material assistance to young, underprivileged, and at-risk children while fostering positive relationships between those children and law enforcement officers. Fundraising efforts began, and yearly donations have been made to both the Fernandina Beach Police Department and the Nassau County Sheriffs Office.  This year, each agency received a $5,000 check, which allows each department to help out 150 children for the holidays.

On Saturday, November 19, 2022, Sheriff Bill Leeper received a check for NCSO Charities, Inc. from Nam Knights, the First Coast Northeast Florida Chapter based in Nassau County. Sheriff Leeper thanked the entire group for their generosity and service to our country and communities. The motorcycle club visited the Nassau County Sheriff’s Office to donate money to our Shop with a Cop program. The group laid a blue wreath at the Nassau County Law Enforcement Memorial wall in honor of all those law enforcement officers who have died in the line of duty in Nassau County. Membership of Nam Knights is made up of police officers (active and retired) and also Vietnam and other military era veterans. The mission of the Nam Knights is to honor the memory of American Veterans and Police Officers who have lost their lives in the line of duty, to assist Veterans and Police Officers in their time of need, and to promote community awareness through sponsorship and participation in various community and fund-raising events.