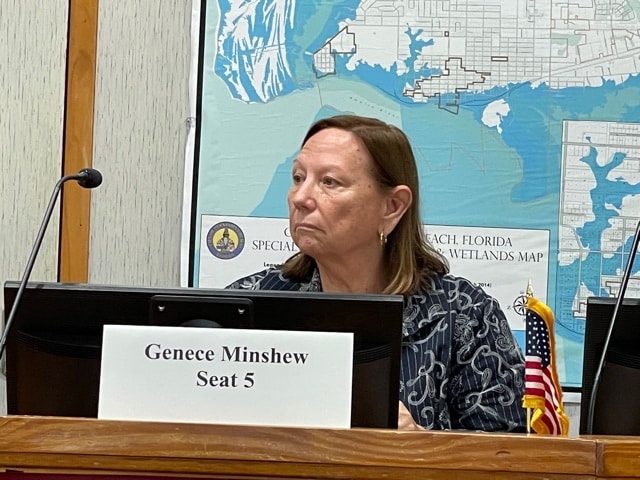 Something is up with the LGBTQ+ position of being “out and proud.” Don’t get me wrong- I am not objecting to keeping one’s sexuality stuff from public eye. In fact, the graphic discussions, parades, drag time story hours are tearing apart our country and leading young impressionable minds away from God’s plan into debauchery, depression, and death.

So when I see the Fernandina homosexual leadership returning to the closet, I take note. Take Genece Minshew for example, you may know her as a two-time and current candidate for Fernandina Beach City Commission. Normally candidates tout their work experience and positions of distinction. If anyone is going to be out and proud, it’s a candidate for public office! But here, what is Minshew’s greatest position of distinction? You can’t find it! It is hidden from her campaign literature. What is it that she is hiding and why?

Genece Minshew is President of Fernandina Pride. There, I said it. Don’t cancel me. After all, Minshew must take pride in launching Fernandina’s Gay Pride parades, the upcoming Pride youth camps, and the Coming Out of the closet events. So why doesn’t the “pride” carry over to her campaign? Anyone?… You guessed it. It’s a campaign tactic to hide one’s true colors, appear palatable, then once elected, take off the sheep’s outfit, pivot left and get “out and proud” as a matter of policy from the inside of power.

Can you see the city pivot and officially promote itself as a destination for a gay vacay stay? This would not sell well in Minshew’s stump speech. None of it sells well in North Florida. In fact, we are doing everything we can to protect our children from this ungodly encroachment in our society, let alone elect it to power. The subterfuge goes deeper and darker, however.

President Minshew’s Sponsors of Pride have also gone back into the closet too. Take the News-Leader, they were out and proud supporters of President Minshew’s organization in 2022 even when Minshew was a declared candidate for City Commission. How’s that for an independent press? Now, News-Leader has retreated to the closet. In fact, today’s survey of Fernandina Pride’s Sponsors listed on the website reveals one lone sponsor.

If you were a sexual freedom warrior seeking to help change genders and encourage homosexual identifications which one Sponsor would you want on your website while running for office? Something mainstream…something that speaks strength and pro business. You guessed it: The Chamber of Commerce….I can feel the gay-vacay-stay creeping in already…[Heads-up Chamber…]

But what happened to FB Pride’s 10+/- other Sponsors? Thanks to the Way Back Machine which saves website history, we can determine which sponsors returned to the closet in this season of Minshew’s campaigning. Here is a partial list closeted sponsors: Democratic Club of Amelia, Nassau Democratic Party, MUV Medical Marijuana Dispensary, First Love Brewery, and ta da! the Purple Sponsor…AHF.

Just who is President Minshew’s highest coveted, er, closeted Sponsor, AHF?
AHF, an AIDs advocacy group organizes gay events around the state of Florida such as Condom Day by putting on a burlesque based on West Side Story. AHF promotes Condom Day as follows:

Through a mirage of colorful fan feathers, wild and exhilarating burlesque show guaranteed to get all of you excited. But would you expect anything less with so many hot bodies in sexy corsets and strapping suspenders dancing around? This stunning burlesque show has it all!

Join us for a raunchy burlesque twist on a classic love story. Our powerhouse performers will wow you with wit and delight you with dance numbers, all while promoting a good cause. This is an International Condom Day celebration you won’t want to miss.

In conclusion, Minshew is going incognito in her campaign literature and scrubbing Pride’s website to fool voters. Look at the battle the Space Coast Pride brought to the City of Melbourne, Florida to have the city issue a permit for Drag Queen Story hour. Heads up Fernandina!

Kant Kansleme is located in an Undisclosed Prayer Closet in Fernandina