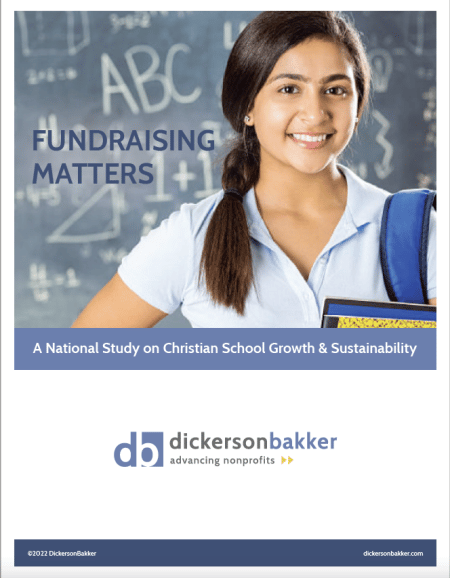 PRIVATE CHRISTIAN SCHOOLS SEE ENROLLMENT SURGE: Christian schools across the U.S. are seeing a surge in enrollment, says a new report, A National Study on Christian School Growth and Sustainability, by fundraising firm DickersonBakker (www.DickersonBakker.com). But many Christian schools aren’t geared up for the influx resulting from the exodus of nearly 2 million students from public schools since the pandemic. NEWS PROVIDED BY
DickersonBakker

Sept. 20, 2022RALEIGH, N.C, Sept. 20, 2022 /Christian Newswire/ — More parents want their children in private Christian schools, but many Christian schools aren’t geared up for the influx of new students, a new research study by nonprofit consulting firm DickersonBakker says .Christian schools — including many that were until recently struggling to fill classrooms — are seeing a surge in interest and enrollment, says the just-released report, A National Study on Christian School Growth and Sustainability.

Eight out of 10 Christian school leaders say there’s increasing demand for Christian education in their area, and the same number report their enrollment has grown since the pandemic. It’s part of a national trend following COVID-19 public school closures when students had to switch to online classes at home — and many parents weren’t happy with what they saw.”Large class sizes, inadequate staffing, disorganized virtual education, curriculum limitations, and rapidly changing social and moral standards… caused parents to take a new look at Christian schools,” says the report.

Public School Exodus: Opportunity For Christian Schools
Public schools across the U.S. have seen an exodus of nearly 2 million students since the pandemic, according to a report last month in The Christian Post. And a recent survey by EdChoice revealed four out of 10 parents say they’d prefer a private education for their children.”

Enrollment Surge Leads to Challenges
Key challenges include balancing budgets amid soaring costs and making tuition fees affordable. Three out of every four Christian school leaders say they’re struggling to hire qualified staff, a third say they don’t have enough room on campus for more students, and yet only three out of 10 schools have increased their fundraising activities.”

Remarkably, seven of the top 10 challenges (identified by Christian school leaders) are related to financial sustainability, and can be at least partially resolved by increasing annual fundraising,” says the report.

Fundraising: A Sticking Point For Many Schools
Although a whopping 97% of Christian school leaders say upping their fundraising efforts is vital to the future of their school, Christian schools “on the whole are not raising money effectively,” and most administrators lack training and guidance on the topic, the study concludes.”If we don’t find a way to fix it, many Christian schools are going to struggle, and some might not survive,” said Bakker, whose firm has helped hundreds of schools boost fundraising.

DickersonBakker estimates Christian schools, on average, invest less than 3% of their annual revenues into raising funds, and nearly six out of 10 of the school leaders involved in the study acknowledge their fundraising efforts need “substantial” improvement. “The upshot of this study is that many Christian schools across the nation are seeing increased enrollment and face many challenges that come with that growth — challenges that can be wholly or partially resolved by increasing their annual fundraising,” Bakker said. “It’s a new era for Christian schools in America.”

DickersonBakker (www.DickersonBakker.com) has been providing professional fund development consulting services to schools and nonprofit clients for over 35 years. With offices in Texas and North Carolina and full-time consultants living in several states, the firm has served hundreds of nonprofits – especially faith-based organizations – across the U.S., Canada and overseas. SOURCE DickersonBakkerCONTACT: Stephen Reed, 843-964-9339, [email protected]