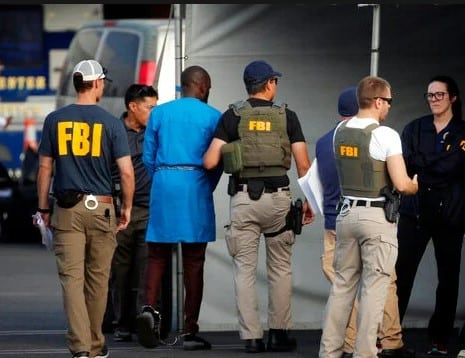 Liberals have deliberate, devious and very successful tactics. They have every intention of eliminating opposition by any means necessary. What has been so successful for them in recent years is to make very serious accusations against an opponent. Make a big show of having 20 or 30 armed, flack jacketed, FBI agents beat on the door of the accused in the early morning hours, handcuff them and perp walk them in front of cameras. The media then picks up the baton and speculates about the seriousness of the alleged crimes the opponent is accused of. Could be extortion, influence selling or, the media will suggest, even sedition, or treason. When the FBI or DOJ is questioned they can’t comment on an “on going investigation”. But the media will breathlessly report on it, speculate about it, and opine about the seriousness of it endlessly.

The only problem is that there is no real investigation because there is no crime, only an accusation of a crime. They stretch the “investigation” as long as possible, months, years and then a brief press release saying they found nothing to charge criminally. But the damage is done. Too many people believe the accused is guilty of whatever they were charged with.

What brought this to mind for me were three recent events. A brief press release saying there would be no charges against Rudy Gulianni. No explanation, no apology.  About the same time, the young woman who accused Alan Dershowitz of having sex with her when she was underage suddenly realized she was so young that she may have mistaken him for someone else. Charges dropped. And, of course, the unprecedented raid on Mar-A-Lago. Apparently, they found nothing other than what every other President would have in their archives. But, once again, damage done.

Except for the “Russian Collusion” hoax that went on for more than two years (and is still being used regardless of having been proven false), one of the most egregious uses of this tactic was General Flynn. General Flynn had a distinguished 33 year military career. He worked under three Presidents. President Obama appointed him head of the Defense Intelligence Agency. Trump appointed him National Security Advisor. Flynn had the highest security clearance there is. The Left knew everything there was to know about General Flynn. They knew he knew where the bodies were buried. FBI Director James Comey quickly took him out. One of the ways they destroy people is the cost of their legal defense.  Most innocent people want to prove their innocence but the government has an endless budget for lawyers to keep the case going as long as possible and bankrupt their target. And once they threatened to destroy his son, Flynn pled guilty. Mission accomplished.

And now, Elon Musk is giving us a glimpse into the government’s collusion with Social Media Tech companies to silence their opposition. Once again with the enthusiastic help of the Liberal Media. Naming anything that goes against the Left’s narrative “hate speech” or “misinformation”. They don’t have to show proof. The accusation is sufficient. They suppressed the Hunter Biden Laptop even though the FBI has had the laptop for months and knew it belonged to Hunter. Then to give more credence to the lie they had FIFTY former Intelligence Agency officials sign a letter saying the laptop was “Russian Disinformation”. No reporter asked any of them if they had examined the laptop or what evidence they had to make such a claim. Then more than two years later the media admitted the laptop is, in fact, real. Again, damage done.

We keep hoping when the undeniable truth comes out that the people who had believed all the lies would see the truth. But when the media doesn’t even report it, they never hear the truth. The Liberal media was silent on Elon Musk’s release of the proof Twitter conspired with the government to suppress Hunter Biden’s laptop and silence opposition. The government would ask them to silence someone and Twitter would reply, “Handled”. The Left kept defending the censorship by saying Twitter’s censorship wasn’t a violation of the First Amendment because they were a private company and they can do what they want. But when they are collaborating with the government to censor people and suppress information, it certainly IS.

Knowing the media isn’t going to report on evidence of the government malfeasance, WE MUST, whenever we can. We can’t be the “silent majority” any longer. We must stand up and speak up.

Michael Greer retired from the film/television industry and is the co-organizer of the Santa Monica Tea Party and the Los Angeles Tea Party, on the board of directors of the Citizens’ Alliance for Property Rights and was a member of the Republican Central Committee for the 41st Assembly District.  Her website is: http://madderthanhell.wordpress.com/