Report on Last GOP Candidate Forum Before The Primary 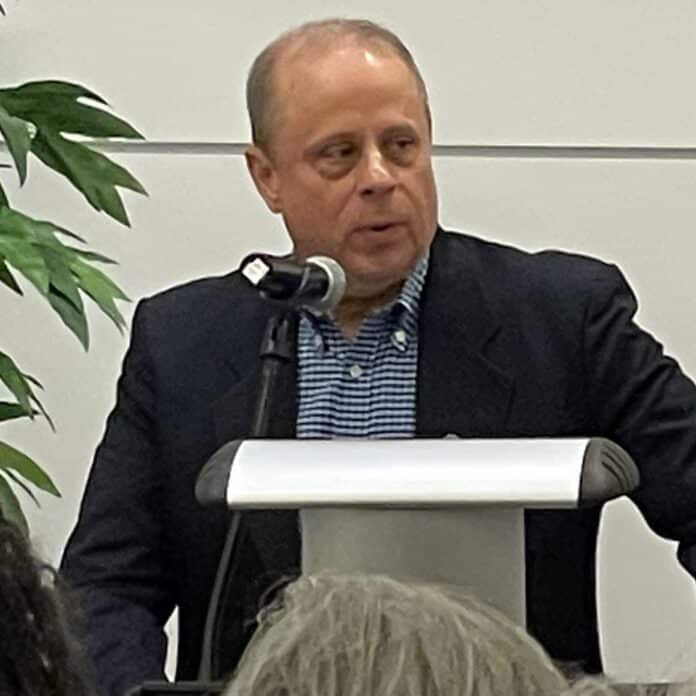 By George Miller and Jessica Styers

The Nassau County Republican Party’s August meeting was a candidate forum, which posed some pretty good prepared-in-advance questions. It was a 90 minute information-packed session with plenty of questions for the eight candidates who showed up. There was no opportunity for the audience to question the candidates. Event Moderator Chris Kirkland (above photo) instructed candidates to stay away from negative attacks on other candidates. That minimized fratricide but also cut off some legitimate attempts by the candidates to differentiate themselves from each other. Given what has gone on this year, I can’t fault the GOP for doing it, though. Since this was a party event, only Republicans were participating for the partisan positions. The Democratic Party has been unresponsive to Citizens Journal Florida’s inquiries/offers, which still stand.

Nate Bill (not present. Unclear whether he was invited)

Erick Aguilar (invited- did not participate)

Aaron Bean (invited- did not participate)

Clay Yarborough (unopposed in primary- made brief statement. He will be the main speaker at the September meeting) …

Here was the original meeting notice we received:

The Republican Party of Nassau County will hold our next monthly meeting 7PM August 18, 2022, at the Nassau Room of the Florida State College Nassau Campus in Yulee (76346 William Burgess Blvd. Yulee, FL 32097).  The meeting will feature a candidate forum consisting of local Republican candidates for Ocean Highway and Port Authority Districts 3 & 4, Florida House of Representative District 15, and U.S. Congressional District 4.

REC members may submit questions for Port Authority, State Legislative, and Congressional candidates in writing to: [email protected]  We ask that your questions not be directed at a specific candidate and focus on qualifications, experience, and the specific platform(s) of candidates.  All questions will be vetted to ensure objectivity and appropriateness.

This was the second forum and both were very good.  Chris Kirkland did a wonderful job setting up the ground rules and asking the questions.  He wanted to keep the comments by the candidates about themselves and to eliminate the negativity that seems to have been brought into Nassau County in the mailers from the candidates and the PACs.

This forum focused on the positions of Ocean Highway and Port Authority for District 3 and 4.  Also there were the candidates for the State Representative, District 15 and one candidate for Representative in Congress, District 4.  In addition, uncontested Clay Yarborough, Florida State Senate, District 4 came and was given time to speak after the forum wrapped up.  Clay Yarborough will be featured at the next Republican Meeting.

It was disappointing that the City Commissioners were not featured, because there had been emails and flyers that were very negative and it would have been great for those emails and flyers to be addressed.  All of those candidates had been featured at the first forum, though, so this was by design.

We always focus on the commissioners, the state, school board, and the federal candidates.  So to have a forum that gave the majority of the questions  to the Ocean Highway and Port Authority for District 3 and 4  was incredibly informing.  Scott Hanna and Justin Taylor were there for District 3 and Kyle Caswell and Ray Nelson were there from District 4.  Unfortunately Nate Bell was not there to answer questions from District 4.

We really got to know the issues, where very often the positions of Ocean Highway and Port Authority are on the back burner.  I learned a lot about how the city of Fernandina and the County need to work together and all the candidates had plans to address this. There were comments about Hazardous Materials and the importance of both ports in attracting jobs to our area, especially with the technical skills.  We also got to know the differences in the candidates, although the differences were more about experience, backgrounds, and  approach to the job than difference in policy.  We had  young candidates and more mature candidates.  We had incumbents and candidates looking to unseat the incumbents.  Generally the discussion was friendly and respectful.

The State Representatives in District 15 Dean Black and Emily Nunez discussed their own positions – and did not discuss all the negative flyers, as per the ground rules set up by Chris Kirkland.  Early on, it appears Dean Black had sent out a large number of flyers  with many of them being very negative about Emily Nunez.  At that time, Nunez had sent out a few mailers which addressed her position.  This has been a heated race with much negative campaigning.  I think both these candidates are conservative and voters should investigate their positions carefully and vote accordingly.  At this forum, the candidates for State Representatives in District 15 Black and Nunez discussed their own positions and what they would do if elected.

Jon Chuba was in his element  since he was the only candidate from the Representative in Congress, District 4.  He was asked “Should Nancy Pelosi have gone to Taiwan?”  His answer was “absolutely not”

We’ve covered or watched a few local candidate forums so far. With a transcontinental move and all that entails, buying, outfitting and moving a boat a thousand miles and starting a newspaper from scratch, all in the last year, we’ve just begun to have the time to study local politics. We’ve already seen the Republican State House, Congressional and County Commission candidates in action, but the Harbor Commission and Senate candidates were new to us.

There were two candidates each participating for the District 3 & 4 Ocean, Highway & Port Authority Member openings. These positions have increased in importance as the Port faces challenges of technology, capital, marketing, the changing economy and poor community relations over its “footprint” and transparency/responsiveness issues. With a new operator taking over, there is some optimism and some uncertainty. My understanding is that these people would not actually run the port, which is the task of the operator, but collectively act as the board of directors and are known as “Commissioners.”

For District 3, incumbent Scott Hanna promoted his practical experience and skills as a small businessman (electrician) and Commissioner, of course. He pointed out that on his watch, a tugboat, cranes, and other equipment were brought in, port information went online, a new port operator was brought in and the port was designated a “superhighway” for barge service.

Justin Taylor presented his civic activity and educational qualifications. He listed economic development, partnerships and transparency as his top three priorities that he would bring to the position. He said he was rated among the top 40 under 40 business people and was a past county GOP Chair, County Commissioner and on the county economic review board.

For District 4, 23 year old Kyle Caswell led with his own strengths, which he described as 5 years’ hands-on port operations activities and bringing the perspective of youth, which he said is the future.

Ray Nelson had all that Caswell offered, but also tacks on 40 years experience, which includes actually setting up and running ports, up to the General Manager level. He lamented that the Port is the “best kept secret on the East Coast”, but said that is an opportunity, with great upside, but that there are local “footprint” concerns to address.

District 15 State House candidates Dean Black (Duval County GOP Chair) and Emily Nunez, retirement planner, once more went head to head, subject to the moderator’s restrictions on negative engagement. Sparks only flew and only briefly. when Dean asserted that he ran a “clean campaign.” Anyone who has been the recipient of his campaign flyers and actually read and understood them could legitimately disagree. This mars his otherwise good candidacy and qualifications as a candidate. Nunez’s response was indirect and quite mild, but she got her licks in afterward (see photo and caption below).

Black informed the audience that his family has ranched in the area since 1803- eight generations and that he has added 5 kids to that. He is running because of deep concerns about what is going on in local, state and federal levels. He said the free state of Florida is great and he wants to help keep it that way. He highlighted the dysfunction of the radical left and added that he will fight back against their agenda, including the recent bill which would add 84,00 IRS agents.

Both candidates are veterans, both have business experience. Black is well connected in the party and has significant PAC support. We the People leader Deb Boelkes has done extensive “deep diving” research on local candidate campaign finance (you can see this in a previous forum report in this publication). Black’s endorsers tend to be establishment Republican officials, while Nunez has Conservative superstar endorsers such As General Michael Flynn, Anthony Sabatini, Ted Yolo and also some faith groups. Nunez’s campaign has more of a MAGA flavor. Black claims he can get things done better, while Nunez doesn’t agree with all the priorities he might try to address.

The sole District 4 House of Representatives candidate to show up was Jon Chuba, a health insurance plan writer. He is an unabashed Conservative Christian and church deacon, who takes no money from special interests and supports a more Conservative agenda than most establishment Republicans. He said he was “called” to run, that the (2020) election was fraudulent, that Biden’s Afghan withdrawal and border crisis are disastrous. His watchwords were faith, family, freedom, capitalism, Constitution, all of which are being destroyed by the radical left, he intoned.

It is clear that opponent Aaron Bean, who has made himself scarce at candidate forums and does not respond to our requests for info, has the money, endorsements, name recognition, popularity and track record. We haven’t seen or heard much from opponent Erick Aguilar, who is supposedly polling a distant second to Bean, ever since the allegations of fundraising fraud surfaced. We interviewed him and his campaign manager twice on that. The only thing we could get from them is “I have done nothing wrong.” They would not address the specifics “at this time” and said it would come out later. Aguilar also has a strongly Conservative agenda, but no track record to verify it. He has run before, but was getting more traction this time, until July.

We’ll add a bit to this report if time permits, We wanted to get something out, since the primary is Tuesday.