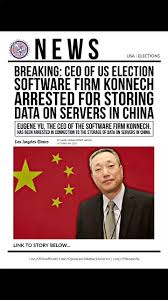 To We the People – In case you haven’t seen it, investigative journalist-par excellence, Kanekoa the Great, took a deep dive into thousands of Chinese government-deleted webpages to determine the truth about election software company’s Konnech’s connection to China. Once you see his latest article, you’ll quickly realize Konnech is way more connected to China than they are to the US!

Kanekoa’s article is a VERY long read, but it’s chock full of exhibits and other detailed evidence, including details from a 2019 US Senate report titled Threats to the U.S. Research Enterprise: China’s Talent Recruitment Plans which explains how China’s 200+ overseas talent recruitment plans—the most prominent of which is the Thousand Talents Plan—has contributed to China’s global rise over the last 20 years.

The article also includes analysis by the FBI which found that between 2008 and 2020, China invested more than $2 trillion into human resources as part of a “whole-of-government campaign to recruit talent and foreign experts from around the world.”

Believe me, the more you read, the more astounded you will be that the LA County District Attorney dropped the criminal charges against Konnech’s CEO, Eugene Yu (for illegally sending sensitive data about US poll workers to China).  It’s even more infuriating knowing that Catherine Engelbrecht and Greg Phillips (True the Vote) were jailed on October 31—for nearly a week—because they refused to name their sources in the civil proceeding concerning Konnech’s alleged breach of contract (for storing US poll worker data in China).

I dare say you won’t find a more informative article on the subject: https://open.substack.com/pub/kanekoa/p/how-the-chinese-academy-of-sciences?r=5e8ks&utm_campaign=post&utm_medium=email

The good news is, now that Catherine and Gregg are out of jail, they have filed a response to their suit, so it’s far from over. Hopefully, jurisdictions beyond LA (like Hillsborough County, FL, St. Louis, Detroit, and others) using Konnech’s election management software will be willing to take further action, especially since some use Konnech for UOCAVA ballots (Uniformed and Overseas Citizens Absentee Voting Act), and everything from election worker HR to Inventory management. Alleghany county PA even uses Konnech to manage the voter rolls.

Speaking of Catherine Englebrecht and Gregg Phillips, they are right back at it, doing all they can to prevent the kind of elections we’ve been experiencing for the past two years from becoming “normal.” Their most recent ½ hour podcast this week was broadcast from Phoenix where they are working diligently with Kari Lake to do whatever they legally can to get to a fair and transparent voting process in AZ. https://truethevote.locals.com/post/3041988/livestream-what-happened-whats-next

The good news is that they claim, “Arizona is far from over. So is Nevada.” They are now trying to understand just what went wrong. They are also moving quickly to stop AZ from certifying the election. What they have seen so far proves the AZ election process is very flawed and broken, especially the chain of custody process (“It’s totally muddled”) and electronic adjudication (“One of the messiest adjudication processes we’ve ever seen”).

Likewise,  if the scanner’s drawer #3 fills up too quickly (because the scanner wouldn’t accept the ballots)…they don’t know if any of those ballots ever get counted at all. Catherine and Gregg claim Katie Hobbs—currently the Secretary of State who is responsible for the entire process—has been totally silent about all of it.

It’s time we all stand up and demand action to STOP THE CORRUPTION!