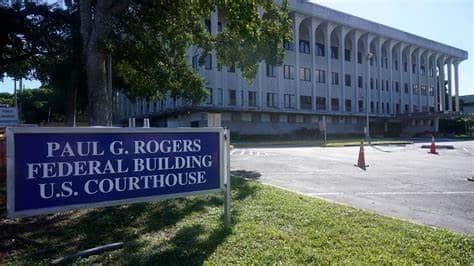 (Washington, DC) – Judicial Watch announced today that a hearing is ordered on August 18, 2022, at 1 p.m. ET in the West Palm Beach Division regarding Judicial Watch and media requests for the underlying affidavit and other warrant materials tied to the unprecedented and controversial raid on the home of former President Trump. Magistrate Judge Bruce Reinhart will preside.

Yesterday, the Biden Department of Justice opposed Judicial Watch’s request that the court unseal the affidavit. The Justice Department was ordered by Magistrate Judge Reinhart to respond yesterday to Judicial Watch’s Motion to Unseal the warrant and supporting materials behind the FBI raid of President Donald Trump’s home in Mar-a-Lago. In its filing, the Justice Department alleged that releasing the affidavit would “cause significant and irreparable damage” to its ongoing criminal investigation.

It seems like the Biden Justice Department is telling the court what to do. Respectfully, the court should make its own independent assessment of the compelling public interest in transparency about this abusive raid.  The ‘criminal investigation’ the Biden administration is covering up reeks of corruption and dishonesty – and is based on a reinvention of law about presidential records that is at odds with the U.S. Constitution, court rulings, federal statutes, and prior government legal positions and practice. No administration should be able to raid the home of a former president and putative presidential candidate based on ‘secret’ reasons.

The U.S. Constitution and federal law give unreviewable authority to President Trump to take whatever records he wishes at the end of his presidency. The Biden administration’s dishonest depiction of personal records of President Trump it illicitly seized during the raid as “classified” is further demonstration that the raid was a brazen act of raw political abuse.

On August 9, Judicial Watch filed its motion asking the U.S. District Court for the Southern District of Florida to unseal as soon as possible the search warrant materials used by the FBI to raid President Trump’s Mar-a-Lago home in Florida (U.S. v. Sealed Search Warrant (Case No. 9:22-mj-08332)).

On August 11, the DOJ filed a motion offering to unseal certain warrant materials.

On August 12, Judicial Watch Judicial Watch filed President Trump’s public statement with the court, in which he made it clear that he would not oppose the release of documents related to the August 8, 2022, raid. Later that day, the DOJ made a partial release of the Trump raid warrant materials.

Initially, the Albany Times Union and the New York Times joined Judicial Watch in filing for the unsealing of the warrant by filing an amicus letter and motion respectively. Other interests later joined in the effort.

Due to multiple organizations filing to unseal the warrant, Judge Reinhart further ordered that, “To avoid the need for individualized orders on any future motion(s) to unseal, it is ORDERED that the Government shall file an omnibus response to all motions to unseal on or before 5:00 p.m. Eastern time on August 15, 2022.”

In its motion Judicial Watch states:

Judicial Watch is investigating the potential politicization of the Federal Bureau of Investigation and the U.S. Department of Justice and whether the FBI and the Justice Department are abusing their law enforcement powers to harass a likely future political opponent of President Biden.

The public has an urgent and substantial interest in understanding the predicate for the execution of the unprecedented search warrant of the private residence of a former president and likely future political opponent…. [N]o official explanation or information has been released about the search. As of the filing of this motion, the public record consists solely of speculation and inuendo. In short, the historical presumption of access to warrant materials vastly outweighs any interest the government may have in keeping the materials under seal.

Given the political context, and the highly unusual action of executing a search warrant at the residence of a former President and likely future political opponent, it is essential that the public understands as soon as possible the basis for the government’s action. Any government interest in securing the identities of witnesses and confidential sources, if any, may be addressed by appropriate redactions from the search warrant affidavit.