January 6: If It was Really an “Insurrection,” the Capitol Would Have been a Smoking Ruin 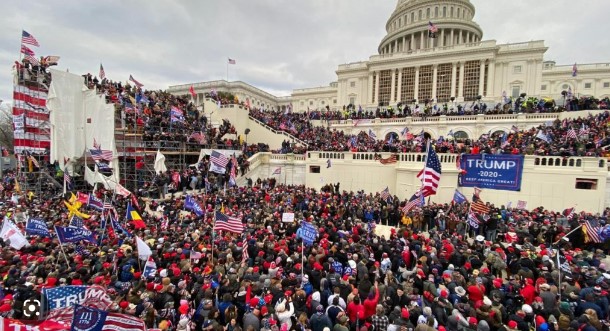 It is two years today since the fateful DC protest by over a million people over alleged 2020 election fraud. So where are we? There is a blizzard of misinformation, most of it distorting the truth about what really happened and why. The Establishment media and politicians refer to it as a “violent Insurrection.” But was it? This USA Today article is representative of the extreme distortion of events in the establishment media echo chamber. If it was really an “Insurrection,” the Capitol would have been left a smoking ruin. Read on.

The protesters and many, many millions more, concluded that the 2020 election was stolen by forces favoring Joe Biden, who barely campaigned and only had miniscule support- until the Democrat elite intervened to prevent the nomination of Socialist Bernie Sanders and substituted Biden in a stunning breach of protocol and procedures.

There were many indications of blatant irregularities leading up to, during and after the election. Anyone who even mentioned these was immediately branded a “conspiracy theorist”, demonized and often “canceled” (just as people who questioned the now thoroughly discredited “Russia, Russia, Russia” 2016 election narrative were). Challenges were quickly dismissed as “baseless,” without foundation,” without even granting discovery, without presentation of evidence and other trappings of justice.

After officials and media refused to address it, protesters responded by bombarding Congress with protest messages, then showing up a million strong in DC and many more in rallies all over nation on January 6, 2021. This was the day that the U.S. Senate constitutionally gathered to decide whether to approve the results, under the supervision of the Vice President, who was Mike Pence at that time. This step is not intended to be a ceremonial rubber-stamping.

ALL that I spoke to told me that it was overwhelmingly peaceful, although there were a few ugly incidents. A million protested thusly. Only a few thousand went to the Capitol Steps, with thousands more farther out on the grounds. Protesters who went past the barricades were mostly unchallenged by law enforcement. Many were even encouraged by them. I know at least a dozen people who surrounded the building and one who went into the Capitol.

Of the only few hundred who actually went into the building, most went through open doors (these are massive and have magnetic locks), largely unopposed. Who opened them? Nearly none were violent. The only violent death was a likely unjustified shooting of a protester by a Capitol policeman with a record of bad judgement. There was a heart attack death and someone was trampled to death. Not good, but considering the circumstances, it could have been much worse.

I have two friends who were gassed by law enforcement. Their crime was simply standing near the Capitol steps. A few windows were broken. Ugly selfies and photos were taken. Someone stole Pelosi’s laptop after briefly occupying her office. I have another acquaintance who was arrested, imprisoned, charged, convicted and sentenced to 20 years, who wasn’t even there. Some have been in jail for nearly two years, many in solitary confinement under terrible conditions, with restrictions on health care, visitors and legal counsel (Examples). These are conditions in totalitarian states. The establishment feels VERY threatened by people pointing out their fraud and daring to protest. Therefore protesters must be made a terrible example of to discourage any future unapproved dissent.

While this was happening, I was at a protest in Thousand Oaks, CA. We had no trouble with the Sheriff’s officers, or did they have cause to be concerned by us. But we made our case quite clear. We were simultaneously tracking DC events via radio and TV and were appalled at Pence’s lying speech stating his position to do nothing, that there was no problem, that he could do nothing even if there was and that there was no such precedent. A lie, as Thomas Jefferson proved in 1801. At that point, with the last legal recourse dashed, people all over the nation became angry. It could have turned into a REAL insurrection, but it did not.

In spite of what you may have read or heard from talking heads, there were abundant reasons to believe that there were many, many irregularities in the election. Having watched all of the so-called “swing state” election hearings, reading the affidavits, seeing the hastily prepared evidence, listening to testimony, I also concluded that it was very likely stolen. You can read several articles I wrote on the subject (linked below), but many more were written, TV shows and even movies, such as 2000 Mules were made about it. The evidence from that movie alone was sufficient to prove that far more votes than needed to change the outcome were suspect. The probable direction of these irregularities would favor Biden. But there was far, far more. Considering the circumstances, the actions of the crowd- and Trump administration officials-were incredibly mild.

Trump’s opponents have falsely tried to claim that he illegally incited insurrection, tried to “overturn” the election, promoted false electors and more, based on laughably flimsy claims and legal interpretations. All of this was perpetrated via a one-sided kangaroo court staffed 100% by his enemies, only selectively allowing cherry-picked witnesses and evidence, denying transparency, discovery and any semblance of due process. Only days before the so called “January 6 Select Committee” would be dissolved, it suddenly referred charges to the Justice Dept, taking it out of the hands of the new Congress.

Expect to see some pretty tough future investigation of their actions and those of the Biden family and administration in general. Of course the Democrats have already stated that their end game in this is to make it impossible for Trump to run in 2024. If so, bring on FL Gov. Ron DeSantis, who is even more formidable.

Denying fair elections, representation and legal due process, along with false imprisonment under terrible conditions violate what our Constitution stands for. What are your “representatives” doing about this? Most of them are doing nothing, or even supporting it. When I asked a Congressional candidate if January 6 was an insurrection, he immediately terminated our Q&A session, directing attendees to the dessert table. I fear that eventually this illegal, unjust situation will inevitably provoke very strong reactions to counter it. We should be very sad for our nation and attempt to rectify the situation before it is too late.

The author wrote these articles linked below not too long after the most corrupt election in US. history.  He didn’t yet have access to the results of all of the additional unfolding investigations. Subsequent discoveries have only validated it.

Anatomy of an Election Steal

“Not a Shred of Evidence of Election Fraud” ….