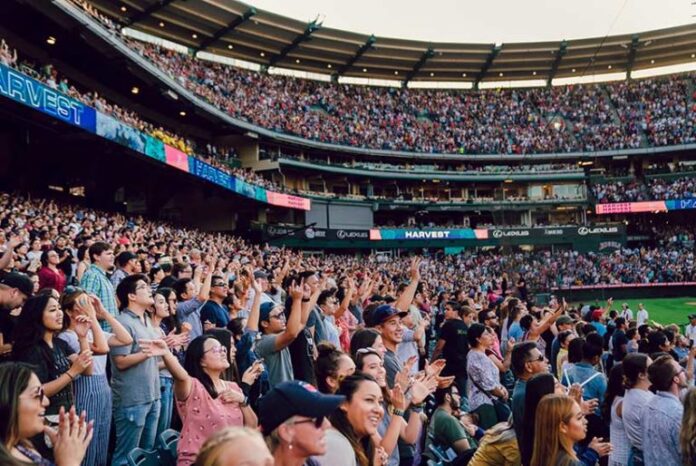 It’s safe to say there’s not much that hasn’t changed since 1990 — and that goes for SoCal Harvest. Started that year by Greg Laurie and Chuck Smith, Pastor and Founder of Calvary Chapel, the annual evangelistic event held in Southern California has seen thousands come to Christ through the preaching of the Gospel.

Laurie is set to return to Angel Stadium in Anaheim, California, for two nights on Nov. 5-6 for SoCal Harvest, along with music from artists like Phil Wickham, Jeremy Camp, Andy Mineo, Newsboys and Crowder.

Even back in 1990, when the internet was still in its infancy, Laurie, founder and lead pastor of Harvest Churches and Harvest Crusades, saw the potential reach for SoCal Harvest. “It has evolved in every way imaginable,” Laurie, 69, told The Christian Post.

Since then, Laurie says over 6 million people have attended in person, and over 600,000 have made professions of faith to follow Jesus Christ. Though the inaugural event was streamed in what he called a “very jerky webcast,” it wasn’t until Laurie received a letter with a photo that showed someone watching that year’s Harvest event using a computer hooked up to a battery in a field somewhere in Africa that he realized its potential.

“I thought, ‘Well, we need to do this every year,’” he said. “As time has passed, our message has not changed but our methodology certainly has.” According to Laurie, so have the audiences: he said the level of biblical literacy compared to when he began preaching in the early 1970s is “mind-blowing.”

“People know so little about the Bible, so little about God, yet there’s this openness,” he said, pointing to a survey released earlier this year which found over half of Americans hold largely positive views of Jesus Christ. “I don’t think it’s Jesus Himself that turns people away,” said Laurie. “Sometimes it’s the actions of His followers, other times its sheer ignorance on the part of people where they don’t realize Jesus is not merely a historical figure, but He’s a Savior.”

Rapper Andy Mineo, who’s part of the Reach Records family of Christian hip-hop artists including Lecrae, Tedashii, Trip Lee, and others, told CP he’s looking forward not only to performing at Angel Stadium, but also just to be a part of it all.

“Those are the type of things that you only dream of, the opportunity to perform on stages and spaces like that,” he said. “But beyond that, I love what the purpose behind the whole thing is, to give a world-class experience and top-notch production to people to come to enjoy for free and to hear a message of hope and positivity and goodness.  “I hope that I get to play a little part in seeing somebody have an evening that’s memorable forever for them.”

In addition to music, this year’s SoCal Harvest will also feature exclusive, never before seen scenes from the upcoming Laurie-produced feature film, “Jesus Revolution,” which he hopes will stir the hearts of those who attend.

In fact, Laurie said he plans to call on the thousands of believers at SoCal Harvest to join in prayer for another “Jesus Revolution” in California and beyond, even as he acknowledged the seeming mass exodus of Californians to other states during the COVID-19 pandemic.

“I wish we could have a new export to the rest of America, a new fresh spiritual awakening that, God willing, would start here,” he said.  “He did it before, He can certainly do it again.”

Greg Laurie is the senior pastor of Harvest Christian Fellowship with campuses in California and Hawaii. He began his pastoral ministry at the age of 19 by leading a Bible study of 30 people. Since then, God has transformed that small group into a church of some 15,000 people. Today, Harvest is one of the largest churches in America, and consistently ranks among the most influential churches in the country.

In 1990, Laurie began holding large-scale public evangelistic events called Harvest Crusades. Since that time, more than 9.8 million people have participated in Harvest Crusades events in person or online around the United States. In 2012, Laurie launched Harvest America, a nationwide event using the internet to simulcast live HD video to thousands of locations across the country. With an unprecedented 306,000 Americans in live attendance, Harvest America ranks among the largest presentations of the gospel in US history. Harvest Crusades have also been held internationally in Canada, Australia, and New Zealand. More importantly, some 506,644 people have made professions of faith through these outreaches. In 2020 and in partnership with Kingdom Story Company, Laurie premiered his first-ever cinematic crusade, A Rush of Hope, viewed by over 2 million people in its opening weekend. Some 150,000 people made professions of faith in 2020 through Harvest Ministries.

Laurie is the featured speaker of the nationally syndicated radio program, A New Beginning, which is broadcast on more than 1,100 radio outlets around the world. Laurie has a weekly television program on major TV networks like Lifetime, Fox Business, Newsmax, Daystar, KCAL 9 Los Angeles, and the Trinity Broadcasting Network, and he has appeared on many other television news programs.

Along with his work at Harvest Ministries, Laurie served as the 2013 Honorary Chairman of the National Day of Prayer, and also serves on the board of directors of the Billy Graham Evangelistic Association. He holds honorary doctorates from Biola University and Azusa Pacific University.

In addition to speaking and assisting other ministries, Laurie has authored over 70 books including Lennon, Dylan, Alice, & Jesus, Johnny Cash: The Redemption of an American Icon, Jesus Revolution, Steve McQueen: The Salvation of an American Icon, Live Love Fight, Tell Someone, The New Believer’s Bible, Hope for Hurting Hearts, and his autobiography, Lost Boy. The accompanying documentary film, Lost Boy: The Next Chapter, as well as the film Hope for Hurting Hearts, and his most recent film, Steve McQueen: American Icon, features the story of the famed actor finding salvation in Christ. In 2021, Pastor Greg Laurie released a new book Billy Graham: The Man I Knew.

Greg has been married to Cathe Laurie for more than 40 years and they have two sons: Christopher and Jonathan. Greg and Cathe also have five grandchildren.