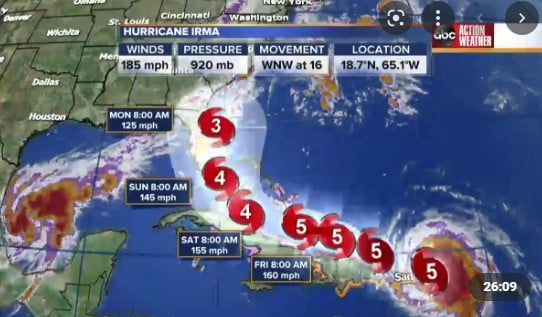 From Florida Division of Emergency Management, 9-9-22

Today, on the eve of the 5-year anniversary of Hurricane Irma, Governor Ron DeSantis celebrates the resiliency of impacted communities across the state and encourages all Floridians to remain prepared as Florida enters the historical peak of hurricane season. Hurricane Irma was the strongest hurricane ever observed in the open Atlantic Ocean and the longest-lived Category 5 hurricane on record.

“Hurricanes can destroy people’s homes and businesses in an instant, which is why we’ve prioritized helping Florida’s communities rebuild stronger in the aftermath of disasters,” said Governor Ron DeSantis. “On the anniversary of Hurricane Irma, I’m proud of the work that we’ve accomplished to improve the resiliency of our communities and equip them to face future storms.”

“Today, we remember the devastating impact Hurricane Irma left on millions of Floridians statewide five years ago. Thanks to the leadership of Governor DeSantis, the Division has been able to streamline our processes and ensure that communities are quickly and efficiently receiving the funding they need to recover and rebuild,” said FDEM Director Kevin Guthrie. “We will continue to support cities and counties throughout their recovery and stand ready to respond to potential storms this hurricane season that may threaten the State of Florida.”

“Hurricane Irma left a path of devastation across our state – destroying the homes, livelihoods, and memories of so many. And while Hurricane Irma was strong, the resolve of Floridians proved to be stronger,” said FLHSMV Executive Director, Terry L. Rhodes. “As we reflect on the five-year anniversary of Hurricane Irma, let this be a reminder to all Floridians that disaster preparation doesn’t go out of season. Every household should have a plan in place, a stocked disaster kit, and at least a half of a tank of gas in their vehicles at all times this hurricane season.”

“The FWC is often one of the first agencies to respond to natural disasters and in the aftermath of Hurricane Irma, virtually every FWC officer in the state came to assist recovery efforts in the months that followed this deadly storm. Working together with our partner agencies, we were able to quickly provide support so desperately needed by residents of this special community,” said FWC Lieutenant Colonel Alfredo Escanio. “This five-year anniversary serves as a somber reminder of how powerful and destructive storms can be and should spur all of us to stay prepared during hurricane season.”

Hurricane Irma made landfall near Cudjoe Key, Florida on the morning of September 10, 2017, as a powerful Category 4 storm with maximum winds of 130 mph. The center of the storm then made landfall in Marco Island as a Category 4 later that afternoon. To date, Hurricane Irma is the costliest storm to impact the State of Florida.

An estimated 6.8 million residents were ordered to evacuate during Hurricane Irma, causing significant traffic congestion and fuel shortages. Roughly 6.7 million homes and businesses across the state were left without power immediately after Hurricane Irma’s landfall, and personnel and resources from 28 states and Washington, D.C. deployed to Florida to assist in Hurricane Irma response and recovery efforts.

The State of Florida immediately requested and was granted a Major Disaster Declaration, which authorized assistance for all 67 counties under the Federal Emergency Management Agency (FEMA) Public Assistance program and the Hazard Mitigation Grant Program (HMGP). The Division continues to support long-term mitigation and recovery efforts for communities impacted by Hurricane Irma. Projects include:

Since 2018, the Division has distributed nearly $7.6 billion in critical disaster recovery funding to support long-term recovery efforts for communities rebuilding from recent disasters.

The 2022 Atlantic Hurricane Season runs through November 30, with the historical peak of the season occurring in September. While the season has been off to a relatively quiet start, disasters can strike at any time. The Division encourages Floridians to stay prepared and take advantage of no-cost and low-cost disaster preparedness activities, including:

Full remarks from this morning’s press conference are available here.