GOP to Take Down Jan. 6 Committee With Their Own Report 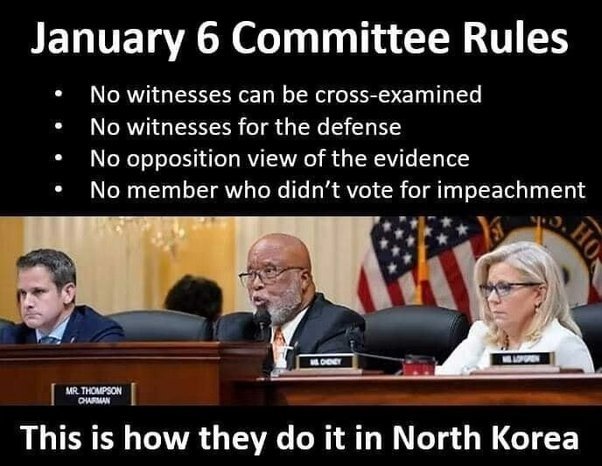 I hope, HOPE the Republicans TEAR the Democrats APART, along with their co-horts in the media!! Nancy Pelosi’s J6 committee isn’t even LEGAL, according to the House of Representatives website, but hey… since when do the democrats follow the rules?

The Jan. 6 Committee will be releasing at least part of its final report on Monday, including its executive summary and eight chapters. The whole thing is reportedly 1000 pages long.

The purpose of the partisan exercise was to do all they could to injure President Donald Trump so that might help them during the midterms. But the Republicans still won the House and Trump still declared that he was running in 2024. So they failed to achieve their main purpose. They will doubtless try to make a criminal referral on Trump and others and it’s going to be something to see on what evidence they try to hang it since they didn’t present any evidence that Trump was guilty of any crimes.

Americans rejected the partisan exercise, as we reported, with most failing to watch it and it not changing their minds about Jan. 6. The Committee had no one appointed by Republicans on it and didn’t allow any defense by Trump or any rebuttal exercise. All it had was people picked by House Speaker Nancy Pelosi (D-CA) including the two execrable Trump-hating Republicans, Rep. Liz Cheney (R-WY) and Rep. Adam Kinzinger (R-IL). So anything it presented was fatally flawed from the start.

However, the Committee isn’t going to be alone in issuing a report. The Republicans are going to issue their report, from their committee, made up in part of the Republican appointees who Pelosi refused to accept, Rep. Jim Banks (R-IN) and Rep. Jim Jordan (R-OH). They will rebut the Democratic report and focus on real points about the failures of security as opposed to the purely political effort to get Trump in which the Democrats are engaged. They’re calling out the “official” report for the Democratic propaganda it is.

The Republicans probed the Capitol Police and FBI’s intelligence gathering and dissemination, as well as the insufficient training and equipment given to law enforcement — including by interviewing Capitol Police officers.

By contrast, Banks claimed, the select committee’s plan to have Trump as the focal point of its report is “all about political payback.”

He said the GOP group will also “dive into legislative and policy changes that could be made by the next speaker.”