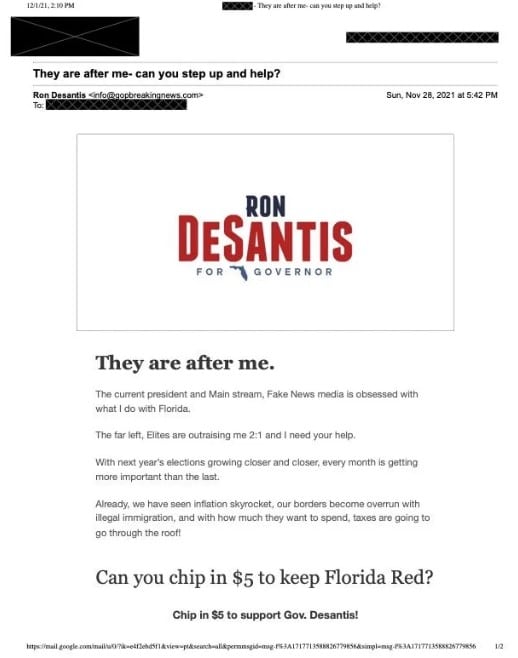 District 4 Republican House of Representatives candidate Dr. Erick Aguilar has been accused of scamming donors by sending out mailers appearing to fundraise for Gov. Ron DeSantis and others but funneling the money to his own account. A July 15 article and Tweets in Politico Florida (links below) a publication with a left-wing bias, touched off a furor that has some Republicans turning on him with a vengeance. The website flafourfacts.com of unknown ownership displays some accusations.

(Image shown above is example of alleged deceptive advertising.)

We have asked Aguilar to address the specific allegations repeatedly. He has said “I’ve done nothing wrong”. This afternoon we asked again via telephone and he replied that “this is all a smear campaign.” Earlier today, his campaign manager told us that “we have nothing to hide, we’ve done nothing wrong.”

When I tried to go through my list of specific questions with Aguilar, he said “I will not respond at this time” (emphasizing the last three words). When I asked if he thought he would be able to participate in the GOP “Sunshine” debate next week, he said that he was quite sure and that things will come out there, although he wouldn’t say what.

He did provide a few tidbits though… The allegation that his consultant dumped him, he said, “is a complete lie.” He claims that the consultant was also working for his opponent Aaron Bean (conflict of interest). He also said that the termination violated the 30 day cancellation clause. He added that implications that he needed the mailers to raise $100,000 to qualify for the state GOP debate were false, as he already had far more than that from other sources, including his own donations. Debate participants must poll at least 10% (he claims 14%) and have $100,000 (Claims he already had much more).

Bean is now also making accusations and demanding an investigation. Our inquiries to the Bean campaign for info/comments were shunted to a media consultant and our email got no response by time of publication.

As a result of the 2020 census, Florida gained a House of Representative seat. The brand new District 4 has Nassau County and portions of Duval and Clay counties. Six candidates are still running, three on the Republican Ballot, two Democrats and a Republican write-in candidate. Candidate and long time elected official Aaron Bean appears to be way ahead in the polls and official endorsements, but way behind Aguilar in fundraising, which brings us to the crux of the matter.

Per Deb Boelkes of the We The People grassroots civic group in Fernandina Beach, said Aguilar had raised over a million dollars as of Saturday, over $400,000 of it self-funded. He said he had made a lot of money in the stock market, was also a “penny pincher” and thought that the best investment he could make was in his country and that his candidacy was it.

At a candidate forum they sponsored Monday night, Boelkes asked Aguilar a question about the accusations. Aguilar’s response was to launch into a series of assertions that he was being attacked by “anti MAGA” people and denied he was doing anything wrong, without responding to the specifics. We got a similar response from him later while talking after the event. We tried to set up an interview, he would not commit, but said we could talk the next day.

After getting no response from him after calling the next day, we contacted his campaign manager, who agreed to work with him on written questions we submitted. We agreed that we would run his answers verbatim with zero modifications. Aguilar finally called and his non-answers to the specific questions and general comments are noted herein.

We posed the following questions to the Aguilar campaign today, 7-19-22:

1. Is it true that your WinRed account was used to send out mailers soliciting donations, not mentioning you, but Trump, DeSantis and other politicians?

2. Did mailers give the impression that the solicitation was for them or you? Did the money go to you or your campaign fund? How much and when?

3. Please send us the mailers you did send.

4. Did you create and/or send the mailers or did some other person or organization do it? If so, who?  Did you know about this? If so, when did you become aware of it and when and how did you act on it?

5. What were your communications with WinRed and the political consultant mentioned in articles?

All that the attack articles have provided so far are assertions that those were the ads, that those ads were sent by him and money funneled to them. The proof hasn’t been provided, although this may be part of the strategy.

The state Republican party is already contemplating action to remove him from the debate at their upcoming event, although he says he is confident that won’t occur. It would seem that prompt forthright answers would be the best route to regaining legitimacy and credibility with the electorate. Without that the primary race is down to Bean, a conservative with extensive establishment backing or Jon Chuba, also conservative, but a newcomer without the resources and backing for likely victory.

So, we await the next moves from all parties.

Most of the articles linked below are based upon an article and Tweets in Politico Florida, a publication with a left-wing bias:

Michael Miller, A retired Fire Lieutenant/EMT from NY has been in FB for 8 years.  He is a fierce advocate for Liberty, a sailing captain and instructor for Windward Sailing.  He dabbles in theatre, photography, geopolitics and markets and now writing.  Look for his writing here and at: https://firesail.substack.com/