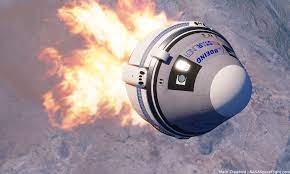 WASHINGTON — NASA has delayed the first flight of Boeing’s CST-100 Starliner commercial crew vehicle with astronauts on board, a slip that will push back the spacecraft’s first operational mission into 2024.

NASA said Nov. 3 that the Crew Flight Test (CFT) mission, with agency astronauts Barry “Butch” Wilmore and Suni Williams on board, was now scheduled for April 2023. The mission was previously planned for February.

NASA said the new date avoids a conflict with the SpaceX Crew-6 mission to the International Space Station, which is currently scheduled for launch in mid-February. “The date adjustment deconflicts visiting spacecraft traffic at the space station as NASA and Boeing work together to achieve flight readiness,” the agency stated, adding that both Starliner and its Atlas 5 rocket “remain on track for readiness in early 2023.”

However, at an Oct. 27 meeting of NASA’s Aerospace Safety Advisory Panel, members raised doubts about the readiness of the vehicle for both CFT and later operational missions.

Iger (Disney CEO) to employees: Maybe we need to dial down the activism. DeSantis: You better believe it