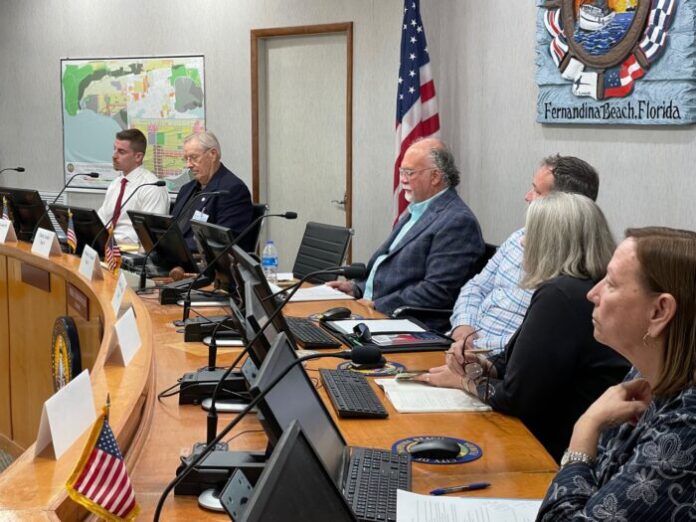 The November ballot asks voters to select commissioners to represent Seat 4 and Seat 5 for the next four years. Seven Fernandina Beach residents are on the ballot.

Current Mayor Mike Lednovich is the lone incumbent, campaigning for re-election to Commission Seat 4. The challengers are Dr. James Antun, Christopher Nickoloff and Chesley Lemire. Lemire did not attend the event.

Friday’s forum was held a City Hall and moderated by Mike Phillips, editor of the Fernandina Observer, which sponsored the event. About 40 residents attended. They listened as candidates were given fixed time limits to respond to questions composed by the Observer and distributed to the participants in advance.

The first question was about candidate backgrounds and general comments. We’ll leave out the bios since other events, publicity and candidate web sites already cover that.

Ayscue wants to serve/make a difference, change the budget process and finish the seawall.

McMonagle wants to give back to the community.

After allowing each candidate to provide a short bio, Phillips presented the following:

Q1. Serious capital expenses are in the city’s future. Which one would be your first priority and why?

This question generated a solid consensus, as each candidate echoed support for the “seawall,” the preferred term to reference the city’s multiyear waterfront stabilization project along the Amelia River and Front Street.

“In my opinion the seawall is paramount,” Antun said. He noted a stabilized waterfront is necessary to justify investment in the other large scale capital projects outlined above.

Lednovich said Ian demonstrated the city is vulnerable to flooding in two other areas; where Egan’s Creek meets Atlantic Avenue and Escambia Slough. Flood mitigating measures ought to be looked at as part of the “seawall” initiative.

Like many of those in attendance, candidate Christopher Nickoloff, sensed the seawall was atop everyone’s list. He acknowledged his support and then added, “I’d like talk to about my second priority and that’s City Hall.” He characterized the structure as “the central nervous system of the city”, emphasizing the need for safety.

Nickoloff challenged the next City Commission to establish a “secondary location” where municipal departments could relocate and provide service to residents in the event of natural disaster or a declaration from inspectors that City Hall is structurally unsafe.

Ayscue reiterated the seawall priority, which he said should go north to the port. He suggested a public-private partnership to cover costs of the seawall and other downtown projects, such as landscaping.

Monagle also endorsed the seawall primacy, saying the city’s mission is to serve and protect rights, protect from water damage and use some of the American Rescue Act funds to do all this.

Minshew said overall “resiliency” should be the overriding priority which includes the seawall & downtown as well as the slough. She mentioned that downtown is the engine of commerce, which should be made to stay workable, attract tourists, etc.

Q2. State and federal funds are available for a portion of the city’s looming capital costs, but they aren’t enough. New sources of revenue will be needed. What new source or sources would you support?

Unlike the capital programs, the question of generating new revenue sparked a variety of replies. The pros and cons of parking fees, “voluntary” retail taxes and proposing a general bond issue were voiced by nearly all the candidates.

Because tourism is a major industry of the Island, Antun said a “voluntary” retail tax modeled after the current levy assessed on St. Simon Island, GA., could generate significant revenue. He said St. Simon officials report the program nets $1 million per year and the results exceed initial projections. He cited the “My Fernandina” idea of a “voluntary” tax here which could raise $800K annually. He is opposed to a bond issue for anything other than an emergency.

McMonagle agreed with the idea of tourist-serving businesses assessing the fee. “It could be 1% of the bill, or round the amount up to the dollar,” she explained. “People don’t think of change (from a dollar) as real money.”

A non-residential beach parking fee program also garnered attention, but participants admit it would have to be carefully designed so as to not violate federal mandates that require equal access to public beaches. Lednovich said the city enjoys an estimated $20 million annually from federal agencies in “beach renourishment” materials and services and warned against not qualifying for the services due to access questions.

“I believe we need to coordinate with the county” to make sure any type of visitor tax on the Island will not jeopardize outside funding for beach, maintenance and shoreline protection projects, Lednovich cautioned.

He seemed ambivalent about a bond issue, saying “yes and no”, that it depended upon the economy.

Caution to support a general obligation bond initiative was expressed by others, too. Nickoloff said the primary benefit of borrowing for long term projects is that the voters have to approve the bond measure at the ballot box.

“You have to make sure” the bond offering “is not open ended,” to get my support, if elected to the commission.

He favors a moratorium on new city facilities, along with closing/combining facilities to save money. He wants to see a larger 5-year capital expenditures program, with a voter approved bond issue. He favors paid parking for non-residents.

Ayscue wants a closer look at the budget to get operational expenses under control before tackling new capital expenditures. He reiterated the need to find new revenue sources and seawall project partners.

Monagle opined that that beach parking “doesn’t feel right”, bond issues should only be for special purposes (referred to the Greenway project). She likes the idea of a bond issue, because “people have to vote on it.” She observed that “the budget is out of control.” contains “unneeded spending”, needs cuts. She likes the idea of the My Fernandina voluntary taxes.

Menshew favored a bigger picture approach, including a long-term strategic plan, which she said the city doesn’t have. She would relook at the budget process and have staff present three options, along with the required millage rates to support each version. She cited the need to address much deferred maintenance, “climate change,” bonds for 1-2 projects, but offered no further details., citing only “resiliency” and downtown bond projects.

Moderator Phillips opted to allow the final portion to be more open ended. Candidates were given equal time to speak on a topic of their choice, ranging from “why you are better qualified than your opponents” or some aspect of city operation that has not been addressed.

As an owner of two local businesses, Antun and his family are “not going anywhere.” He cited sound decision-making and his commitment to quality of life issues and safety as reasons to vote for him.

“The barbarians are at the gate,” proclaimed Lednovich in a warning that congestion on the Island and housing density are trends the City of Fernandina Beach cannot solve alone. He cited the need for a “mobility plan” with Nassau County to address the wide array of issues that accompany anticipated population growth. He again stressed his years of experience and accomplishments on the Commission and mentioned that he had performed well to “measurable metrics.”

Nickoloff also noted the better relationships with the county commission and port authority (Ocean, Highway & Port Authority) are necessary for “restoring and maintaining our historic roots” of a family vacation venue with a small-town feel. He said a bond referendum for beach/parks could be a “last resort” solution. He said he’s qualified, has lots of time to work on this, his fire dept. experience brought skills in getting along with people retired, organizational/management skills, gets things done, partly founded a charitable organization with $1MM budget.

Ayscue cited his service leadership/experience in Nassau fire rescue, knows budget, millage, the system, working with other agencies, the mosquito control board experience.

Monagle is concerned about the City Manager, who she says has “inverted the triangle”, acting as if the Commission reported to him instead of the proper chain of command, which should be just the reverse. She said he has too much to say about what is going on. She opined that getting a stronger Commission is one possible solution- as in “we set policy and you carry it out”- and the other one is “his services are no longer needed.” he wrapped up by saying that people are not happy about the budget, how things are being run and blame him.
Menshew Declared that the city needs to become more effective, more efficient and that the City Manager has that responsibility. She disagreed with Mayor Lednovich, insisting that there are actually very few quantifiable metrics available and that those have been collected and presented rather haphazardly, in different ways, channels and inconsistently. She called for KPI’s (Key Performance Indicators- formal, quantifiable, available, meaningful measurements of performance), which she said are the City Manager’s responsibility.

Several candidates- Antun, Asycue and Lednovich- expressed the need to improve the “culture” of City Hall departments. Lag time in receiving permits from the building department surfaced as a specific horrible example fueling a wider perception that residents must wait on the city, versus the city serving Fernandina Beach residents.

The forum allowed commission hopefuls to speak on matters that commonly surface in events sponsored by private groups and participants had the questions in advance. To learn where commission candidates stand on some more pointed matters, please review the published results of the 2022 CCDF USA-Nassau County Voter Guide for Nassau School Board and Fernandina Council Election.

Roy M Postel is a resident of Fernandina Beach (“off Island”). He is a general assignment Citizens Journal Florida reporter with a keen interest in politics and history. He loves to investigate tips from fellow citizens. Contact him at [email protected]

Roy M Postel
Roy M Postel is a resident of Fernandina Beach ("off Island"). He is a general assignment Citizens Journal Florida reporter with a keen interest in politics and history. He loves to investigate tips from fellow citizens. Contact him at [email protected]
RELATED ARTICLES
Opinion