So what was all the fuss about poll watching anyway going into the 2022 midterm election cycle? 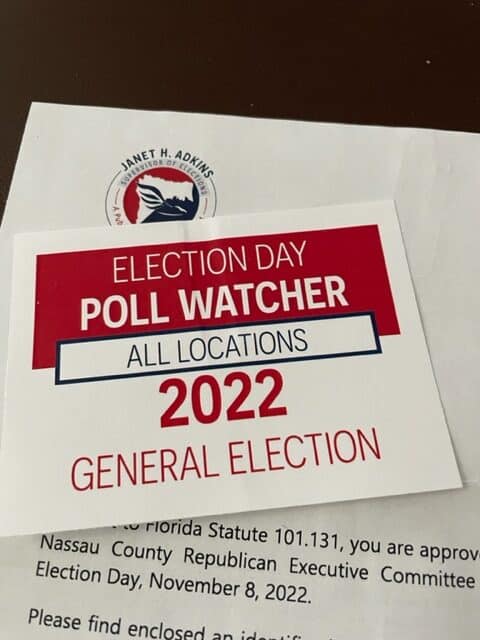 This post is a firsthand account of a Nassau County poll watcher. As a volunteer for the Republican Party of Nassau County, I wanted to be more involved after witnessing the shenanigans of the 2020 election. I volunteered to take training, become credentialed and monitor the in-person voting process during the primary and general election cycle at several locations throughout the county.

What is a poll watcher? In Florida, poll watchers are observers authorized by the county Supervisor of Elections to sit in a designated area of the voting location to monitor the process on behalf of a candidate or political party. Election law requires poll watchers be registered to vote in the county where they ask to observe.

By 7 PM when the polls closed for the 2022 midterm last Tuesday, I had spent more than 60 hours at polling locations from Callahan to Yulee to the Fernandina Rec. Center on the island watching hundreds of Nassau County residents exercise their right to vote. I was just one of more than 50 registered GOP residents to earn credentials and monitor the process during 24 days of in-person voting. During the August cycle (11 days of early voting and the Aug. 26 primary election day) the Nassau County Democrats had very little presence. But for the November period (11 days of early voting and the Nov. 8 election day) the Dems had a poll watcher at almost every venue I attended.

The online training class was a video call, and everyone received guidelines via email to have in hand and reference at the polling place if an issue developed. We also had access to an online portal, where we could send a text to a team of lawyers to report equipment failure or some breach of protocol.

Did stepped up citizen vigilance enhance the integrity of the 2022 midterm election?

Most definitely…because every poll watcher better understands the process and experiences the flaws on a first-hand basis. The experience equips them to influence fellow citizens, family, friends and neighbors on what can be done to improve Florida’s system. Here’s a list of conversation starters for improvements:

The most common complaint voiced by the GOP team after 11-days of early voting for the August primary was, “This is boring.” Volunteers are assigned a spot to observe the entire room. You may be 15 or 20 feet away from the point where a voter’s ID and address are examined. Most voters are unaware of your purpose when they see you sitting to the side of the room.

If a resident presents a signed, valid, photo ID and the address and signature match registration records, a ballot is printed. The voter then goes to a booth, makes his selections, then walks across the room, feeds the ballot into a scanner and leaves. Not much intrigue here, especially after watching the sequence of interaction repeat with minimal variation time after time.

Kudos to Supervisor of Elections Janet Adkins and her team. There was not a single complaint brought to the GOP about the voting process in Nassau County throughout the November midterm cycle. Nassau County’s poll workers are a pleasant and professional group of parttime employees. Each knew their duties, kept the lines moving and guided voters to the on-site “chief clerk” to resolve discrepancies of voter ID or address matching.

When it comes to voting, order and a process of uniformity are objectives. So, if you’re a poll watcher celebrate the mundane. Advocate for the system to yield more of the same.

A few volunteers in August declined to help during the November cycle because the experience did not meet their expectations. Some who joined the team in November will not participate again, either.

Several of my colleagues were not moved my argument their very presence in the voting place served as a deterrent to any potential fraud or bending of the rules. It’s a hassle filling out the absentee ballot form. Maybe it’s not mission critical to require a voter complete a change of address form when records show he moved to a different unit in the same apartment building.

Make no mistake, the presence of partisan observers keeps poll workers on their toes. They know you are in the room, and even if nothing unusual happens while you’re on duty, you represent a source of outside authority.

As film director, actor and writer, Woody Allen famously said, “Showing up is eighty percent of life.” Poll watching is a case in point, just being present makes a difference which will never be fully revealed.

There is no supervision of unused vote-by-mail ballots

Based on statistics from the Florida Secretary of State a total of just over 20,000 vote-by-mail ballots were issued in Nassau County for the November midterms. Of that number, 12,400 were received by the SOE. That leaves 8,000 ballots, or 40 percent, with a “not yet returned” status for the midterms. So for every five ballots issued, three were submitted and two were unused.

On my first shift as a poll watcher, I listened closely to a poll worker ask the voter if he had “received a vote-by-mail ballot at his home?”

He said, “Yes, but I didn’t bring it with me.” Then in a reassuring tone, the poll worker said, “That’s okay, just be sure to destroy it when you get home.” My pulse quickened as I looked at my reference sheets from the training. Surely this must be grounds for a provisional ballot, I thought.

I quietly asked the “chief clerk” about the matter. “Doesn’t the law require him to surrender his vote-by-mail ballot before voting in person?” The clerk was very professional and confident while explaining the “practice is allowed” as long as records show the VBM ballot has not been received. The poll worker is correct. In Florida Code, Chapter 101.69 addresses the event I witnessed.

I went back to my seat and made a note. This happened a couple more times before the polls closed at 6 PM. At the end of the shift, I sent a summary text to the legal team via the portal. It just seemed too relaxed. As written, the law seems “indifferent” to the whereabouts of the VBM ballot, if a voter doesn’t have it in their possession.

During the 24 sessions of in-person voting conducted in 2022, I manned a seat in the poll watcher box 19 times. On every occasion, I witnessed residents presenting themselves to vote in-person, despite being issued a vote-by-mail ballot. About a third of the voters “surrendered” their VBM ballot in exchange for an in-person ballot. But the balance received in-person ballots along with only a verbal directive to destroy the unused ballot when returning home.

A few voters protested, claiming they are wrongly identified as having requested a VBM ballot. Some acknowledged asking for a VBM in 2020 because of COVID, and claimed they no longer wanted one and asked to be removed from the list.

Every one of the GOP volunteers watched this practice unfold. In the spirit of convenience, an extra burden is put on the system and the SOE staff to “flag” a second ballot arriving by mail or drop box from someone who voted in-person. Although legal, we agreed to file summary reports so as to document for GOP leadership how prevalent we observed this practice.

By Nov. 8 we’d filed dozens of “summary reports” at the end of each poll watching shifts to document the behavior. The GOP election integrity team was not impressed. At one point, I received a phone call from the regional director asking me to stop sending the summaries.

I said, “Glad we got your attention. You can use the emails to fix the law in Tallahassee. Vote-by-mail ballots shouldn’t be treated like weekly sale papers from Publix.”

Statewide data shows 4.3 million VBM ballots were sent to Floridians for the midterm. As of Nov. 10th, 1.6 million ballots are classified as “not yet returned.” So, one out of every three go unused.

Window for submitting mail-in-ballots is too large

The law informs behavior. Further contributing to the culture of convenience is the wide window for SOE staff to receive mail in ballots. On the SOE website vote-by-mail applicants are told ballots are sent 40 days prior to the election data. Yet, the first ballot for the Nov. 8 midterm was filled out and returned on Sept. 26. That’s 44 days before election day. In the first week of mail in vote activity, the SOE reported four ballots received. By Oct. 10, the end of the second week, just 344 ballots were recorded.

Given the degree of chaos mail in ballots generated in 2020, it is puzzling to me the emphasis put on this voting method, especially now that COVID is largely in the nation’s rearview mirror. After drilling down a bit on the topic, I was surprised to find California and six other states (light blue colored) require every citizen to vote only by mail. Yikes!

Signatures are matched, not verified

Most folks present their Florida driver’s license to meet the identification requirements for receiving a ballot. Poll workers scan the bar code on the DL. This opens a page on the electronic poll book screen where information from the voter registration rolls is displayed. Now, the voter is asked to sign their name, presumably as a way of authenticating their identity.

But if the signature doesn’t quite match, not a problem. I watched poll workers give incoming voters a “mulligan” after their initial try wasn’t readable or didn’t resemble what was on file. I couldn’t see the image from my perch. But when the poll worker holds up the voter’s DL at eye level and asks him to sign the pad again, so the signature looks like it appears on the license not much is left to the imagination.

This sequence was rare, maybe once or twice a day, but again speaks to the culture of convenience.

Too many days of early voting

We should remove Sunday from the days where early voting is allowed. According to the conference of state legislatures, Florida is the only state which requires early voting on Sunday, because the law uses “consecutive” to describe the period of days for voter access.

Citizens Journal deserves credit for providing a forum to examine how Florida Law and the culture of convenience mix and make the voting process viable but with room to improve.

Chapters 97 through 106 of Florida State Law dictate all aspects of the voting and elections. Chapter 101, Voting Methods and Procedures of the 2022 Florida Statutes, can be accessed here for those seeking more details.

Roy M Postel is a resident of Fernandina Beach (“off Island”). He is a general assignment Citizens Journal Florida reporter with a keen interest in politics and history. He loves to investigate tips from fellow citizens. Contact him at [email protected]

Roy M Postel
Roy M Postel is a resident of Fernandina Beach ("off Island"). He is a general assignment Citizens Journal Florida reporter with a keen interest in politics and history. He loves to investigate tips from fellow citizens. Contact him at [email protected]
RELATED ARTICLES
Features