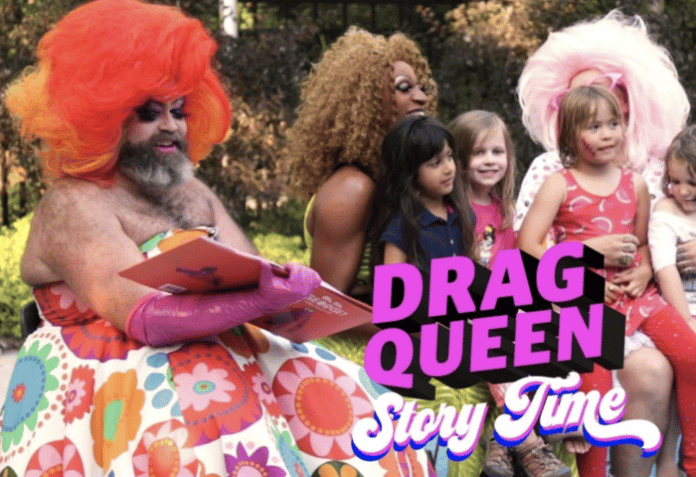 The Washoe County (NV) Library Board of Trustees, along with libraries throughout the US, are making extremely wrong-minded choices to catch the wave of a current trend. They’re deciding that a good way to attract young children to their libraries, is to sponsor read-aloud activities by primarily homosexual men outwardly wearing women’s underwear, prostitute-chic clothing, and garish wigs and makeup. This activity is known as “Drag Queen Story Hour.” Libraries’ decisions to sponsor this activity – while disgusting and pathetic – are understandable.
https://www.psychologytoday.com/us/blog/all-things-lgbtq/201801/the-psychology-drag

After all, the internet and home computers have made libraries increasingly irrelevant. Today’s kids have no idea why they would even go to a library, any more than they’d visit a horse-and-buggy shop or a barrel maker.

Library sponsorships of these transvestite read-alouds are an act of desperation. Libraries are failing in their efforts to attract significant numbers of young children. The primary customers in many libraries, like downtown Reno’s, have become the homeless, drug addicts and the mentally ill. If they can’t reverse this trend, libraries won’t be able to justify their continued existence.

With a big push from politicized supporters of LGBTQ+, library boards have become convinced that these hyper-sexualized “story hours” are a solution for attracting future library users. They believe it’s a “cool” way to teach young children important lessons about tolerance and diversity. They’re wrong.

The underlying message of drag queen story hours has never been about teaching across-the-board tolerance and diversity. Since its inception in 2015 in San Francisco, the primary focus of this activity has been convincing unsuspecting young children, parents, and communities that the aberrant side of the homosexual lifestyle is normal and harmless. It’s neither one.
https://en.wikipedia.org/wiki/Drag_Queen_Story_Hour
https://christopherrufo.com/the-real-story-behind-drag-queen-story-hour/

In our nation, homosexuality is a legal lifestyle choice, and rightfully so.

But in teaching young children about homosexuality, is it accurate or honest to imply that it is “normal?” (i.e. “typical” or “usual”)
• Not when it is the chosen lifestyle of only 1-2% of the US population.
https://www.hli.org/resources/prevalence-of-homosexuality-in-the-us/

Is it accurate or honest to send the message to young children that homosexuality is a harmless lifestyle choice?
•Not when the suicide rate for homosexuals is 3-to-14 times higher than that of heterosexuals –
https://www.healthyplace.com/gender/glbt-mental-health/homosexuality-and-suicide-lgbt-suicide-a-serious-issue

• Not when the life expectancy for homosexuals is 8-20+ years less than heterosexuals
https://www.lifesitenews.com/news/yet-another-study-confirms-gay-life-expectancy-20-years-shorter/

• Not when 70% of new HIV infections are found in the 1-2% of the population that is homosexual males.
https://www.cnsnews.com/news/article/michael-w-chapman/cdc-70-new-hiv-infections-gay-men-anal-sex-riskiest-behavior

• Not when homosexuals’ drug/alcohol abuse rate is significantly higher than that of heterosexuals’.
https://www.cdc.gov/msmhealth/substance-abuse.htm

These lethal facts are purposely ignored during drag queen story hours. If this activity is not exposed for the propaganda activity it truly is and discontinued, what will be the next children’s story hour topics sponsored by Left-leaning library boards? The desirability of Abortion and Gun control? The harmlessness of Illegal immigration? The inherently racist nature of all White people? While all of those topics should be impartially and publicly debated by adults, it is an abuse of taxpayer-funded libraries to allow them to become de facto liberal brainwashing centers for children.

Any library that supports the devious misrepresentation of truth that is Drag Queen Story Hours, is betraying the trust parents have historically placed in library-sponsored activities for children. They are dangerously exposing young children to misinformation that could damage them for years to come.

Paul D. White is a lifelong educator, currently living in Reno, Nevada.  He’s  the co-author of “Saving Our Youth, One Kid at a Time” (Random House), and “Bible Morals for Children – A Parent’s Guide.”  He welcomes feedback at   [email protected]