Biden’s Border Record is Horrible – and It’s About to Get Worse! 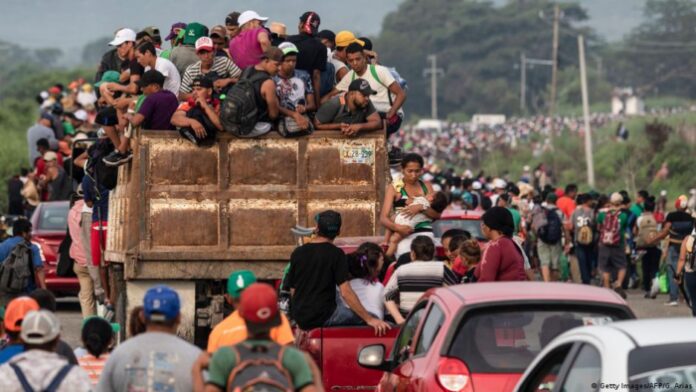 Exclusive: Joseph Farah warns the imminent end of Title 42 means ‘a bigger disaster than ever’

A storm is coming to our southern border.

It’s not a hurricane that is about to hit. It’s a man-made disaster.

When it arrives it will become what future American generations will never forget, said Todd Bensman, a 10-year veteran intelligence analyst for the Texas Department of Public Safety’s Intelligence and Counterterrorism Division and author of “Overrun: How Joe Biden Unleashed the Greatest Border Crisis in U.S. History.”

“Every record in the annals of mass migration lay shattered after nearly two years of President Joe Biden’s negligent stewardship of the American southern border,” he writes. “Yet unimaginably, in about a week’s time, it’s going to get catastrophically worse. Total known illegal border crossings stand at a record-breaking 4.4 million since President Joe Biden’s inauguration with another 1.5 million estimated ‘got-aways’ believed to have slipped into the country undetected.”

What could make it worse?

That will make it immeasurably worse, Bensman warns. It could be apocalyptic.

“Up for court-ordered demolition later this month, Title 42 is the pandemic-control statute that, since March 2020, has allowed U.S. Border Patrol to quickly expel most crossers back to Mexico and, more importantly in doing so, deny them access to a highly defraud-able asylum system,” Bensman says.

Former President Donald Trump used Title 42 to expel and deny asylum abuse to nearly 90% of all apprehended illegal entrants. And denied access to the asylum ruse most naturally stayed home.

“But that all changed on Inauguration Day 2021, when Biden opened huge Title 42 exemptions for immigrant families, solo teenagers and pregnant women,” Bensman said. “This immediately reduced total expulsions to about 60 percent of all apprehended entrants. … Once this last Title 42 remnant is gone, nothing will stand between a vast and desperate global population and the irresistible pull of the U.S. asylum system. … Today’s historic, crushing, border-collapsing 200,000 a month would spike to 340,000 a month, or potentially 4.3 million a year if that level is sustained.”

The number of crossings could reach as high as 18,000 a day, 540,000 a month, 6.4 million a year, those intelligence estimates say. That would equal nearly 50% of the total known illegal population in American today!

Dead bodies lie in the wake of such a flood. The border is also the gateway for illegal drugs – including deadly fentanyl, which is already killing 100,000 Americans annually.

Can you imagine the unfunded burdens that grow heavier by the day, week, month and year on health care systems required to treat the uninsured, on municipal public assistance budgets and school budgets?

Approximately 16,000 migrants crossed the southern border in the last 48 hours. It’s already begun. But we haven’t seen anything yet until Title 42 ends – just four days before Christmas. In El Paso, Texas, over the weekend, 2,460 migrants crossed every day

The thousands of migrants who streamed into the city over the weekend overwhelmed Border Patrol forces, as well as local shelters. Images emerged of a caravan of approximately 1,000 asylum-seekers crossing the Rio Grande into El Paso overnight on Sunday. It is possibly the largest-ever single-crossing group.

Republicans are critical of Joe Biden and his secretary of homeland security, Alejandro Mayorkas. Rep. Andy Biggs of Arizona and other Republican lawmakers held a press conference Tuesday afternoon calling for the impeachment of Mayorkas. Biden is perhaps second on the list.

The first month of Fiscal Year 2023 showed more than 230,000 encounters with CBP, the third-highest month in recent history.

While CPB officials have been expecting a surge once Title 42 ends next week, it appears they were not prepared for the inundation that happened in recent days before the policy was nixed.

In Fiscal Year 2022, an average of 6,500 migrants crossed the southern border every day into California, New Mexico, Arizona and Texas. The total number of CBP encounters exceeded 2.3 million last year – a massive record-high under Biden’s time in office.

Of the thousands of migrants who crossed the border in the last 48 hours, at least three are confirmed gang members, two are sex offenders, two are murderers and two have outstanding warrants.

California Gov. Gavin Newsom, rumored to be considering a White House bid, visited the southern border in his state Monday to assess the situation before the end of Title 42. Newsom praised Biden’s “reform” and said it will “fix our broken immigration system,” while saying Republicans have “done nothing but exploit the situation for political gain.”

The border is about to become a bigger disaster than ever.