What the anti-book banning fetish in our schools is really about. 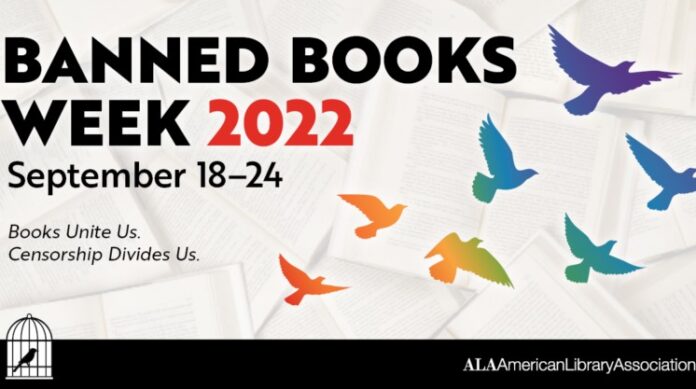 Mercifully, Banned Books Week, celebrated Sept. 18-24 this year, is over, and we can take a deep breath for the next 51 or so weeks till it once again rears its ugly, hysterical, manipulative, leftwing head.

Whatever righteousness this week may have once held, it has been taken over by progressive sex obsessives and groomers who are trying to legitimize the field once known quaintly as “obscenity.”

Started in 1982, Banned Books Week is proudly promoted by the American Library Association, whose incoming president, Emily Drabinski, is euphoric at the prospect of leading the organization. In a tweet, she gushed, “I just cannot believe that a Marxist lesbian who believes that collective power is possible to build and can be wielded for a better world is the president-elect of @ALALibrary. I am so excited for what we will do together. Solidarity!”

In a similar pathetic vein, she added on LinkedIn that she’s proud “to have the support of Randi Weingarten of the American Federation of Teachers for our campaign for president of the American Library Association. Solidarity!”

And, of course, the National Education Association – chief kiddie porn-purveyor in the country – embraces Banned Books Week. A perfect example of the union’s perverse leanings was recently reported by Christopher Rufo. He writes that the NEA and its local affiliate in Hilliard, Ohio, have been providing staff in the city’s school district with QR code-enabled badges, which point to the “NEA LGBTQ+ Caucus” website and resources from various gender activist organizations.

Unfortunately, “Fistgate” was not an isolated incident. On April 30, 2005, GLSEN held an event at Brookline High School in Massachusetts, and distributed an obscene booklet to hundreds of middle and high school students. With headings like F**kin’, S**kin’ and Spit or Swallow?, it describes various sexual practices that can only be described as perverse.

And who can forget the in-your-face “NEA Drag Queen Caucus” (thankfully now defunct) which came to be in 2010.

Additionally, the Fairfax school board is also gives its blessing to Gender Queer, whose protagonist says, “I can’t wait to have your c**k in my mouth — I’m going to give you the bl*w j*b of your life. Then I want you inside me.”

Individual teachers can do things without getting an okay from their school board or principal. In California’s Capistrano school district, for example, a teacher has a “queer library” in her classroom. One of the books, Juliet Takes a Breath by Gabby Rivera, contains extremely graphic imagery of sex between women. Everything you Ever Wanted to Know About Being Trans discusses bondage, sadomasochism, fetishes and kink.

Aside from the downright perversity, there is a pile of irony – not to mention hypocrisy – to the book banning hysteria. The same anti-banning radicals are also in the vanguard of the so-called Cancel Culture, which has led to the censoring of mainstream icons like Dr. Seuss and JK Rowling because they didn’t toe the Woke party line. Also, Columbus Day has been canceled, and statues of George Washington, Abraham Lincoln and Theodore Roosevelt have been torn down in various locales.

Additionally, Facebook workers have routinely suppressed news stories of interest to conservative readers from the social network’s influential “trending” news section, according to a former journalist who worked on the project.

Ultimately, all the Banned Book Week harrumphing is dishonest because no one is actually trying to take away the right to publish any books. The thought of banned books evokes images of totalitarian regimes tossing written material into massive bonfires. In Nazi Germany, the ruling party burned thousands of books written by Jews, communists, and others. The problem that parents have with the books in question is simply that they are not age-appropriate, and have no place in our schools. It has nothing to do with censorship. Our laws prohibit 12-year-olds from going into a store and buying a Playboy or Hustler magazine. Why should schools be allowed to push Lawn Boy on a child of that age?

No, you’d probably call the cops on the pervert.

A few years back, a Florida school teacher humiliated a 12-year-old boy in front of the entire class after she caught him reading a book during free reading time. The teacher, at Park Lakes Elementary School in Fort Lauderdale, ordered Giovanni Rubeo to pick up the telephone on her desk and call his parents. As the other students watched, the teacher left a terse message on the family’s answering machine.

“I noticed that he has a Bible in the classroom,” she said on the recording. “He’s not permitted to read those books in my classroom.”

Larry Sand, a former classroom teacher, is the president of the non-profit California Teachers Empowerment Network – a non-partisan, non-political group dedicated to providing teachers and the general public with reliable and balanced information about professional affiliations and positions on educational issues.

The views and opinions expressed in this commentary do not necessarily reflect the official position of Citizens Journal Florida.