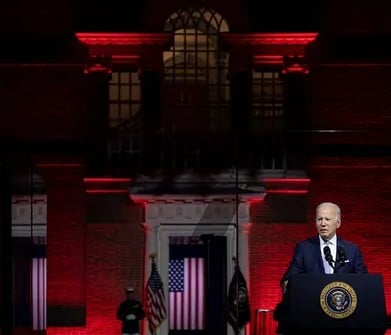 (Editor’s note; this is part of a weekly compendium of recent significant events, culled from world news and curated by Mr. Hernandez.)

Poll: Majority of Democrats Believe There Are ‘Tens of Millions of Dangerous MAGA Republicans’

Most Democrats believe that there are “tens of millions” of “dangerous MAGA Republicans,” a Harvard CAPS-Harris Poll released in September found.

The survey followed President Biden’s angry speech in which he demonized millions of Americans, deeming “MAGA Republicans” a great threat to the very “foundations of our republic.”  The poll asked voters, “Do you think there are tens of millions of dangerous MAGA Republicans backing violence and trying to overthrow the constitution or is that a gross exaggeration and distortion?”

While a majority across the board, 54 percent, said that characterization is a “gross exaggeration,” 46 percent believe that there are, in fact, “tens of millions of dangerous MAGA Republicans.”

But what is more, nearly three-quarters of Democrats, 73 percent, tend to believe Biden’s divisive rhetoric, concluding that there are literally “tens of millions of dangerous MAGA Republicans” who are overtly “backing violence and trying to overthrow the constitution.” Forty-two percent of independents agree with the majority of Democrats, as do 20 percent of Republicans.

The survey was taken September 7-8, 2022, among 1,885 registered voters and follows Biden’s angry September 1 speech, in which he stated that “Donald Trump and the MAGA Republicans represent an extremism that threatens the very foundations of our republic.”

“And here, in my view, is what is true: MAGA Republicans do not respect the Constitution.  They do not believe in the rule of law.  They do not recognize the will of the people,” Biden said, quoting Federal Circuit Court Judge Michael Luttig, who, according to Biden, called Trump “and the extreme MAGA Republicans, quote, a ‘clear and present danger’ to our democracy.”

Notably, a Convention of States Action/Trafalgar Group survey released last week found 58.7 percent of voters expressed the belief that Biden has, in fact, divided the country.

Texas Attorney General Ken Paxton (R) revealed on Twitter that he had secured a huge win for free speech in federal court, hitting back against the tyranny of Big Tech’s rampant online censorship. “BREAKING: I just secured a MASSIVE VICTORY for the Constitution & Free Speech in fed court,” Paxton wrote.

He continued, “#BigTech CANNOT censor the political voices of ANY Texan! The 5th Circuit ‘reject[s] the idea that corporations have a freewheeling First Amendment right to censor what people say.”

Paxton attached two images of court documents to his tweet, highlighting a ruling from the U.S. Court of Appeals for the 5th Circuit. The ruling took overturned a decision made in a lower court that stonewalled Texans from being able to sue Big Tech companies for censoring their political viewpoints, per Just the News.

According to the ruling:

“The implications of the platforms’ argument are staggering. On the platforms’ view, email providers, mobile phone companies, and banks could cancel the accounts of anyone who sends an email, makes a phone call, or spends money in support of a disfavored political party, candidate, or business. What’s worse, the platforms argue that a business can acquire the dominant market position by holding itself out as open to everyone – as Twitter did in championing itself as ‘the free speech wing of the free speech party.’”

According to Just the News, the federal court’s new decision will uphold the law allowing both Texas residents and the Office of the Texas Attorney General to file lawsuits against social media giants like Twitter or Instagram if they engage in censorship.

“Today we reject the idea that corporations have a freewheeling First Amendment right to censor what people say. Because the district court held otherwise, we reverse its injunction and remand for further proceedings,” the ruling concluded.

The Lone Star State’s legal win against the suppression tactics of social media platforms comes on the heels of widespread suspicion and distrust of sites like Facebook.

In early September, a Louisiana judge ordered key members of the Biden administration to hand over communications between themselves and Big Tech companies, per RSBN.

Former President Trump is back at his Mar-a-Lago residence — lamenting on Monday his Palm Beach, Fla., home had been “ransacked” by the FBI’s seizure of White House documents and would “never be the same.”

Dozens of supporters lined a bridge waving flags and cheering as his limousine crossed a bridge near the estate, video footage of the caravan showed.

Writing on his Truth Social platform, Trump said he had “a long and detailed chance” on Sunday night to look around the property.

“Arrived in Florida last night and had a long and detailed chance to check out the scene of yet another government “crime,” the FBI’s Raid and Break-In of my home, Mar-a-Lago,” he wrote. “I guess they don’t think there is a Fourth Amendment anymore, and to them, there isn’t. In any event, after what they have done, the place will never be the same. It was ‘ransacked,’ and in far different condition than the way I left it. Many Agents – And they didn’t even take off their shoes in my bedroom. Nice!!!”

In fact, this provision sets the stage for:

It’s no wonder Fox News recently called this “a deeply troubling development.” Still, most Americans have never even heard of Executive Order 14067.

That’s why today, Jim Rickards – a world-renowned economist and former advisor to both the CIA and the Pentagon – has just sounded the alarm on this troubling new development. In fact, according to Mr. Rickards, this order could mean the end of the U.S. dollar as we know it.

“We’re in for a major upheaval of the U.S. dollar,” he says. “In fact, I predict the 3rd Great Dollar Earthquake has already started…“The first was Roosevelt confiscating private gold in 1934…“The second was Nixon abandoning the gold standard in 1971…“Now,” he says, “Biden’s plan could pave the way for ‘retiring’ the U.S. dollar – and replacing it with this disturbing new alternative.”

(Michael Hernandez, co-founder of the Citizens Journal—Ventura County’s online news service is a former Southern California daily newspaper journalist and religion and news editor. Mr. Hernandez can be contacted at [email protected] and is editor of “America: The End and Our Hope”.)

The views and opinions expressed in this commentary are those of the author and do not necessarily reflect the official position of Citizens Journal Florida. Note: we classified this article as opinion, even though it is mostly news.