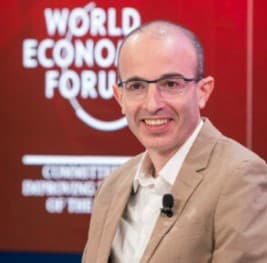 Global Elitist: “We don’t need the vast majority of the population to live”

World Economic Forum Advisor Yuval Noah Harari, an Israeli national, in an interview (published Aug. 9) with Chris Anderson (head of TED Talks) made the claim that “we just don’t need the vast majority of the population.

“Because the future is about developing more and more sophisticated technology, like artificial intelligence [and] bioengineering. Most people don’t contribute anything to that, except perhaps for their data and whatever people are still doing which is useful, these technologies increasingly will make redundant and will make it possible to replace the people.

Earlier this year, Harari warned of a growing class of “useless people” not needed by the global elite and suggested keeping them docile by way of drugs and video games.

“The problem is more boredom, what to do with them and how will they find some sense of meaning in life when they are basically meaningless, worthless.”

“These are dark times for our Nation,” said President Donald Trump. “Nothing like this has ever happened to a President of the United States before.

“After working and cooperating with the relevant Government agencies, this unannounced raid on my home was not necessary or appropriate. It is prosecutorial misconduct, the weaponization of the Justice System, and an attack by Radical Left Democrats who desperately don’t want me to run for President in 2024, especially based on recent polls, and who will likewise do anything to stop Republicans and Conservatives in the upcoming Midterm Elections,” said President Trump.

“Such an assault could only take place in broken, Third-World Countries. Sadly, America has now become one of those Countries, corrupt at a level not seen before. They even broke into my safe! What is the difference between this and Watergate, where operatives broke into the Democrat National Committee? Here, in reverse, Democrats broke into the home of the 45th President of the United States.”

Senate Majority Leader Chuck Schumer and Senator Joe Manchin have proposed the Inflation Reduction Act of 2022, calling for an additional $8 billion in funding to the Internal Revenue Service agents per year over 10 years, adding some 87,000 new agents and over 1.2 million more audits.

President Joe Biden says he will sign the measure that doubles the size of the IRS which was approved by the U.S. Senate and is now before the U.S. House.

According to ACLJ Senior Counsel Andy Ekonomou, “The IRS is still stuck…

“Now instead of modernizing the equipment you need to have in order to deal with the proper collection of revenue, you’re earmarking $45.6 billion dollars to litigate, criminally investigate.”

An IRS ad for the hiring of new agents stated the qualifications needed included: “willingness to use force.”

“Becoming who we are in the fruits of the Spirit of the Lord.”

Masterpiece: Talks from the Book of Ephesians

“Walk worthy of the calling with which you were called.”

(Note: Nathan Edwardson is founding pastor of The Stirring, a Christian and Missionary Alliance Church started in 2007 in Redding, CA whose mission states: “We love. We make disciples.” Watch his Sunday message at: https://subsplash.com/thestirring/media/mi/+75nprsr?autoplay=true.)

“Side effects of the anointing.”

“It shall come to pass in that day That his burden will be taken away from your shoulder, And his yoke from your neck, And the yoke will be destroyed because of the anointing oil.” (NKJV: Isaiah 10:27)

“And the sons of the prophets said to Elisha, “See now, the place where we dwell with you is too small for us. Please, let us go to the Jordan, and let every man take a beam from there, and let us make there a place where we may dwell.” So, he answered, “Go.” Then one said, “Please consent to go with your servants.” And he answered, “I will go.” (NKJV: 2 Kings 6:1-3)

(Note: Lovy L. Elias is founding pastor of Revelation Church LA located in Simi Valley, CA which started as a prayer group in his living room and focuses on revelatory teaching, the prophetic, deliverance, healing and manifestations of miracles, signs and wonders. The church mission is: “to build a people of fire.” Watch his Sunday message on https://www.youtube.com/watch?v=7na6vQadONE. To watch Prophet Elias Aug. 7 message on “Anointing, Grace and God” go to: https://www.youtube.com/watch?v=fURxML7WwIE.)

Michael Hernandez, co-founder of the Citizens Journal—Ventura County’s online news service is a former Southern California daily newspaper journalist and religion and news editor. Mr. Hernandez can be contacted at [email protected] and is editor of “America: The End and Our Hope”.