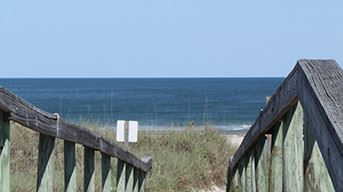 Nassau County and the Tourist Development Council (TDC) are currently conducting a “beach harmonization” study, reportedly an effort to somehow improve the beach experience for residents and visitors alike on Amelia Island.  An outside consultant has been hired and comments to the study have been encouraged from both residents and visitors from far and wide.  I fear that science may get lost in the shuffle of opinion.  Any final recommendations must reflect the unique nature of Amelia Island as a barrier island.

Amelia Island is a barrier island, a relatively rare and the shortest-lived geomorphic form in existence.  Our island is likely only about 6,000 years old but its life span as a structure is not infinite.  Barrier islands protect the mainland but are suspectable to flooding.  As sea levels rise, they naturally migrate onshore.  Our island is basically a pile of sand sitting on a bed of mud (a geomorphic term for clay and silt), held together by vegetation from sea oats to saw palmettos to live oaks.

A 1770 English map of the island shows that we inherited from Nature “high sand hills being a natural dyke or fort against the sea.”  Unfortunately, over time, these sands have eroded due to both human initiatives and natural events such as Hurricane Dora in 1964. Much of the island became vulnerable to major flooding—and thus vulnerable to destruction in a major storm, often defined as the 100-year event.

The US Army Corps of Engineers (USACE) then constructed a rock revetment to provide temporary and very limited protection against the next storm (see monument at Main Beach), and has engaged in beach renourishment efforts, notably the Nassau County Shore Protection Project signed between Nassau County and the USACE in 2008.  This provides at least 50 years of an engineered restoration of our needed sand resupply.

With the return of the island’s sand supply, the onshore winds, sea oats, panic grasses, sea purslane, beach elder and other dune building vegetation have since 1980 rebuilt the dunes needed to protect against the sea.  In fact, the Federal Emergency Management Agency (FEMA) found in 2017 that all of the homes between Sadler and the north end of the undeveloped Riverstone Properties are out of the 100-year flood zone, thanks purely to the beach-dune system that has re-established itself, often with human help.

Any beach harmonization study on this unique, developed barrier island must first enhance the protective nature of the beach-dune system to the existence of the island itself.  The good news is that with a little planning and some minor access controls, all the developed beachfront on the island can grow sufficient dunes in height and width to meet FEMA requirements to get out of the 100-year flood zone.

Sustaining our protective dune system requires protection of the vegetation that builds, restores and holds together the dunes.  These highly adapted plants, led by the State protected sea oats, can handle the harsh sandy, dry, salt spray environment but cannot handle trampling well.  Any beach harmonization plan must provide beach access that protects this vegetation.  Dune friendly walkovers require adequate elevation above the dune surface to allow dune vegetation growth and wind movement to allow the dune to continue to grow and renew itself, out to the vegetation line on the beach.  The Florida Department of Environmental Protection standard provides general guidance on this; however, the critical beach/dune systems on Amelia Island also need to restore and preserve the remnants of the old USACE rock revetment, if we are going to improve resiliency against flooding.  Critical areas of concern are in the City of Fernandina Beach north of Sadler and in American Beach north of Burney Park.  These represent the developed area of the island, where we have not yet achieved dune volume satisfying FEMA requirements to keep properties out of the 100-year flood zone.

While this all may make the dune system sound like a large inhibitor to tourist and resident enjoyment of the beach, nothing could be further from the truth.  Our dunes provide a sanctuary for the gopher tortoises and their associated fauna community; a nesting area for everything from endangered sea turtles to migratory birds that  visit from all over the Earth. This is all supported by a variety of native plants that attract these and a variety of butterflies, hummingbirds, and other pollinators. Many of these native plants on the dune put on beautiful floral displays themselves.

In short, the beach-dune system of Amelia Island reflects something very important to both residents and tourists alike, a still largely natural beach experience with the comforts of home.  A harmonization plan should recognize the vital importance of dunes and avoid any recommendations that would harm them.