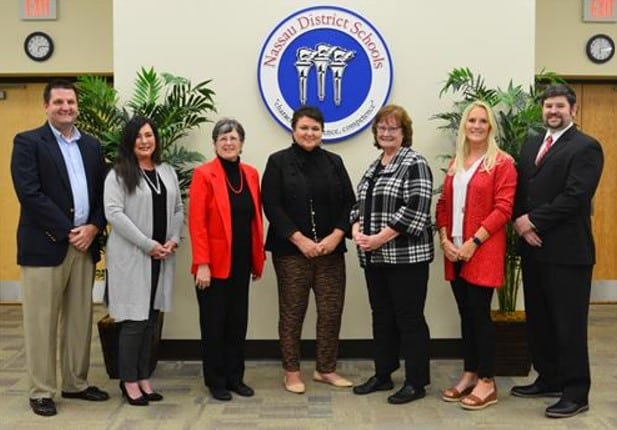 The Nassau County School Board will fill two Board member seats in this election, in District 1 and in District 3.  The Board member in District 5 is reelected because the only opponent was disqualified because she lived outside the District – by less than 200 feet.  This is explained further at the bottom of this article.

There are three candidates for each district, and each is different from the other two.  Voters will have an opportunity to select from among candidates who have board experience, who have education experience, and who are ‘outsiders’ seeking to bring that outside perspective to the board.

Jaime Deonas is an incumbent member of the Nassau County School Board, representing District 3.  He is the only current board member running for reelection, but he is running this time in District 1. This is his third campaign, having won his first and second elections without opposition. He believes in supporting teachers and students, and says he’s seen the district do much to cut costs as the county grows, but it’s not enough.  “Looking at these numbers, I don’t like the fact that we’re ranked 50th out of 67 (districts) — I think we’re better than that,” Deonas said. “Are we to blame for that? Is it just where we are? Is it the system that we’re in? I just think we can do better.” (Florida Politics, August 11, 2022) Mr. Deonas urges a 1 mill property tax increase to support the population growth and the cost of living increase that we’ve seen in the last year.  He believes that this is the best way to increase retention of current teachers, and to support students.  Since 1995, Mr. Deonas has served a paramedic and engineer with the Nassau County Fire Department. He is the founder of Best Friends Companion Care in 2011.  Deonas and his wife, Janet, have two children who attended district schools.

Shannon Hogue is a candidate with multiple Education degrees, and more than 20 years as an educator.  She focuses on reading skills at Emma Love Hardee Elementary School in Fernandina Beach.  Like Mr. Deonas, Ms. Hogue is concerned about retaining our new teachers and staff. She is concerned that the continued turnover of teachers will jeopardize Nassau County School District “A” rating, and she says on her campaign announcement: “When schools’ ratings begin to drop, so do our property values.  We must be proactive in our community.”  She is married to Brent Hogue and has three daughters.  Ms. Hogue established her business, Ms. Shannon’s Summer Camps, as a local summer camp business.  During Covid-19 she also established Sunshine Saturday Ministries.  It delivers flowers to Northeast Florida and Southeast Georgia citizens who need a smile.  She was named Emma Love Hardee’s Teacher of the Year last year, and this year she was recognized by the Veteran of Foreign Affairs’ Elementary Teacher of the Year for District 6.

Rick Pavelock is a Registered Investment Advisor.  He relocated here from North Carolina, and he’s said that he and his family feel incredibly blessed and fortunate to call this place home. His wife Kristy and he are the proud parents of 3 beautiful daughters, and they are expecting their newest addition soon.

While all candidates have identified issues they believe are important, Mr. Pavelock emphasizes that he wants to implement common-sense solutions to address present-day challenges, and he offers detailed action plans including —

Detailed information and explanation of the plans can be found at the link here.

David T. Dew is a 4th generation Yulee native and attended Yulee and Fernandina Beach schools from K-12 and has a 10-year old child who now attends Yulee Elementary School. His career began in industrial construction, then supervising and planning, estimating, scheduling and project management for power plants and oil refineries.  Mr. Dew is currently employed at the Department of Defense Fleet Readiness Center Southeast, the largest tenant command aboard Naval Air Station Jacksonville, serving NASJAX, NS Mayport and Cecil Field. Mr. Dew is active in several local nonprofits including advocacy for the special needs community and director for the Yulee Holiday Parade and Festival.  He also participates in planning fundraising events in Nassau County.  As a School Board Member, Mr. Dew will support transparency in decision making, parental rights to decide educational guidance of their children, pay increases for educators (especially experienced and veteran teachers), and will expect elected officials to do their research and listen to the people they represent before making decisions that will impact our district.

Curtis Gaus is a candidate for School Board member in District 3. He left West Nassau in 2020, and currently is the principal at Bronson Middle-High School in Levy County. His vision is to build on the successes of the past to provide each student with a quality education so they can make an informed choice about their future. Like many other candidates, he believes that retaining quality teachers and staff is an essential requirement for success of the School District, and he points out that with inflation and surrounding counties paying more than Nassau, the educator pay gap between Nassau and nearby counties continues to grow. Mr. Gaus recognizes the great potential in building relationships between the private sector and the educational system to assure that we are building seamless pathways to high-skill, high wage careers for our students. He believes that STEMA education (Science, Technology, Engineering, Math, and the Arts) is essential for future career success, and that again requires a good understanding of what employers will need, and cooperation with parents to assure that their children can practice ‘digital citizenship’ outside the classroom. Mr. Gaus is an advocate for shared communication among the Nassau County Schools, the business community and the economic development board.

Albert J. Wagner is Assistant Principal at Windy Hill Elementary School in the Duval County. He was previously a teacher at Yulee Elementary School. He was an unsuccessful candidate in the 2020 election for Nassau County School Board member. He has nearly years in education, which he believes will provide him “the foresight to understand how board decisions will affect our children in the classroom”. In a social media post, Mr. Wagner set out his vision: “From classroom teachers to district leaders fleeing our district for Georgia, to the safety of our students, to equality of compensation for our staff, to fulfilling (individualized education plan) accommodations with certified and trained staff, to expanding business partnerships, to fiscal transparency, etc.”

NOTE:  Lissa Braddock will be reelected unopposed in District 5.

Her only filed opponent, Ashley Benoit, learned after filing that she lived less than 200 feet outside District 5. According to Ms. Benoit, one factor leading to the mistaken thought that she was in District 5 was inaccurate information on the government websites. Ms. Benoit encourages everyone to get involved in local elections.

There you have it – six candidates possessing markedly different experiences, educations, careers, visions.  This article can provide some insight for contrast and comparison, but nothing can substitute for your research at the candidate’s website and other sources of information about the candidates.

This year, School Board decisions around the country have become national news. Some parents have been very vocal and upset about what is in the curricula. There are few elections – if any – that will affect you and your family more than how your children, grandchildren and the children of friends are educated.

Harvey Slentz is an industrial engineer and attorney who completed a 30-year career in professional and senior executive operational leadership roles in a $65 billion organization, then moved with his wife Tish to Amelia Island, where he has practiced some law, taught some law, been a stand-up comic at the Comedy Zone, and had a ball with his four grandchildren who live in St. Johns County.