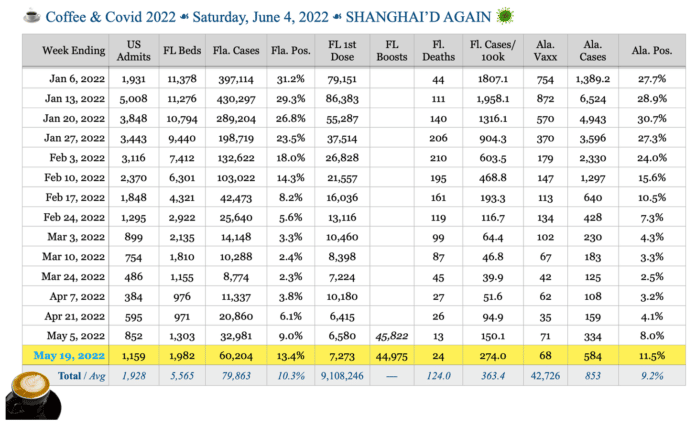 💉 The Motley Fool ran a story Thursday headlined, “Why Moderna and Pfizer Lagged the Market Today.” The finance mag reported “discouraging news from Moderna,” in that the European Union just revised its vaccine contract with Moderna, reducing the number of doses the bloc will buy this year.

Reuters reported that Pfizer has also reduced its planned EU shipments after a contract change, explaining “the region has [] seen a drop in demand for COVID-19 vaccines.” The Motley Fool concluded that “investors are clearly taking the news as a sign that demand for COVID jabs might be weakening.” You think?

Even though Thursday’s market was up 2% overall, Moderna fell 2%, and Pfizer only increased 0.6%, which the Fool seems to consider a net loss.

In its article, Reuters framed the news by suggesting that the EU is just shifting deliveries forward, anticipating a new booster campaign in the fall. But the news agency provided no hard facts about said fall campaign.

It seems clear that demand for the jabs is down in the EU. For some reason. I wonder how much of governments’ booster-pushing is really a scheme to use up excess pre-purchased inventory to help politicians avoid embarrassment for buying too many expensive doses in the first place?

💉 It’s not just the EU. Stéphane Bancel, Moderna’s CEO, is a sad puppy. Frowny face. On May 24th, in a panel discussion at the World Economic Forum in Davos, Bancel announced some alarming news in his quaint French accent. The problem: demand for jabs is way down. Everywhere. He kind of went on and on and on:

Poor Stéphane. The good news is he got a lot of sympathy from the Davos crowd. As Bancel spoke, the other panelists looks alarmed, audibly gasping in horror at some points. Demand down! What! You mean the psyops aren’t working?

Lindsay @TexasLindsay🚨WATCH: Stéphane Bancel, Moderna, CEO: “Sad to say, I’m in the process of throwing away 30M doses in the garbage because nobody wants them. We have a big demand problem… and are working to create demand into countries…” #WEF2022

Now, what do you suppose Bancel meant when he said he was working with governments “to get demand up?” How, exactly? The possibilities are endlessly alarming.

💉 Remember jab-pushing John Fetterman, the hoody-wearing Democrat nominee for U.S. Senate in Pennsylvania who’s recovering from a sudden and unexpected stroke? Seems like I still owe a few of you lunches on that one. I’m good for it.

Cardiomyopathy is a condition where the heart muscle becomes weakened and enlarged, two things that you really don’t want in a heart muscle. The AP explained “cardiomyopathy can impede blood flow and potentially cause heartbeats so irregular they can be fatal.”

Fortunately, Fetterman’s doctors installed a pacemaker in the 52-year-old lawmaker, to shock his heart back into shape whenever it stops beating properly. Whew. He only has another 40-50 years to live with that thing.

Mr. Fetterman still has not said when he might be able to get back to campaigning for the Senate. He’s currently Pennsylvania’s lieutenant governor, but needless to say, he was a no-show in the state Senate all last week, where the hoodied 6’8” giant usually presides over floor sessions. But his neurologist cheerfully reported that Fetterman is making “great progress” in recovering from two conditions that each used to be extremely rare in healthy 52-year-old men.

Now, not so rare. But Fetterman is grateful for the vaccines.

💉 New Yorkers have been enduring a very difficult time lately as the state continues sneaking covid restrictions back into everyday life, especially regarding kids. It’s hard to avoid suspecting that the state government in New York would feel better if kids just weren’t around.

Anyway, Bloomberg ran a story yesterday headlined, “N.Y. School Vaccine Mandate Survives as Top Court Rejects Appeal.” The story is the US Supreme Court declined to hear a challenge to New York’s vaccine mandate for school kids, even though in 2019 the state cancelled its longstanding religious exemption to school vaccines.

So now that the Supreme Court has essentially endorsed the mandate, New York families must find a different way to defeat these mandates, by electing better politicians, homeschooling or podschooling, or moving to Florida along with everybody else. Maybe New Yorkers should start looking into what kinds of purchase contracts the state has signed with vax makers. Gotta use those jabs somehow.

People, I’ve said it a million times and I’ll say it again: Constitutional rights are only as good as what a court will enforce. It’s not magic. We cannot depend on the Constitution to save us, especially if we lose the courts.

But the silver lining is New York’s mandate should help boost vaccine demand. So there’s THAT.

But don’t worry! The subhead quickly reassures, “These data should not be interpreted as vaccines not working, one expert said.” Well, thank goodness. If ONE cherry-picked expert said it, it must be true.

According to ABC, a growing proportion of covid deaths — DEATHS, not cases — are in those who took the safe and effective vaccines. The jabbed were only 18.9% of deaths as of last August, but their share jumped to over 40% by February. Looking just at the boosted, they were only 1.1% of deaths last September, but were ramped up to over 25% by February.

The jabs are working great!

ABC’s cherry-picked expert said the data ACTUALLY shows how WELL the jabs are working, and shouldn’t be considered anything else. So many people are jabbed, he explained, you should EXPECT a lot of them to die from covid. The exact same disease the safe and effective jab was supposed to stop them from dying of. So. Of COURSE their numbers are increasing.

You following the logic? Don’t think about it too hard.

💉 Politico ran a story this month headlined, “Vaccine Injury Compensation Programs Overwhelmed as Congressional Reform Languishes.” Gosh. I wonder why the safe and effective vaccines would be overwhelming the compensation programs? Let’s see if we can figure it out.

Politico reported that, between 2010 and 2020, the federal Countermeasure Injury Compensation Program had just 500 total complaints. But in the last two years, the program has received over 8,000 filed complaints, with injuries ranging from a sore shoulder to the big one, as Fred Sanford used to say.

But the magazine says the vaccine injury fund has paid zero claims so far. “Compensation determinations are made based on individual case reviews, and the statute sets a very high standard that a claimant must meet to be eligible for compensation,” HRSA spokesperson David Bowman said.

Apparently that statutory bar is set REALLY high, since not one of the 8,000 claims have managed to hurdle it yet.

According to Politico, Congress has been slow to fix the problems with the program due to “fears those optics could fuel vaccine hesitancy if the public mistakes the situation as too many injuries flooding the program.” If we MISTAKE the flood of injuries. Because we’re too stupid to recognize the truth, which is ….

🔥 Yesterday, CNN ran a story headlined, “Shanghai Neighborhoods Return to Lockdown a Day After Restrictions Eased.” Not too good for Shanghai people.

It was a great day on Wednesday, when Shanghai finally lifted its brutal two-month lockdowns, allowing most of its grateful 25 million residents to leave their homes (apart from about 2 million people still confined in “high risk” areas).

But Shanghai health officials found seven positive tests on Thursday. Seven! So, lockdown protocols resumed, not even a day later, with four large neighborhoods swiftly sealed off and designated as “medium-risk areas” – meaning residents will be confined to their homes for another two weeks. To slow the spread. The rest of Shanghai must undergo near-daily tests to travel anywhere outside the home.

CNN reported that lines at testing centers can take hours and hours. So you can’t really go too far.

The China People’s Daily verbosely reported that, “Shanghai is actively exploring new mechanisms for normalized prevention and control in the mega-city, and accelerating the return of economic and social development to the normal track.”

In other words, they’re trying to think of new ways to get things back online faster.

💉 Some good news from St. Paul, where a judge ruled against the city’s vaccine mandate. The Pioneer Press ran a story headlined, “Judge rules in favor of St. Paul unions over COVID vaccination mandate.”

The judge’s perceptive order said, “It is difficult for this Court to imagine what could be more intrusive and more destructive to the employer-employee relationship than requiring employees to forfeit their bodily autonomy in the name of maintaining their livelihood.”

The case was brought by some local employee unions, and the judge’s ruling was based on union labor laws. The mandate is now enjoined until and unless the mandate becomes part of a negotiated labor agreement. Which seems unlikely.

The military mag reported that 26 countries including the U.S. and the UK, 38 surface ships, four submarines, nine national land forces, over 170 aircraft and about 25,000 soldiers “will participate in the biennial Rim of the Pacific (RIMPAC) exercise scheduled to take place between 29 June and 4 August.”

🚀 The Times of Israel reported yesterday that another Iranian military drone scientist died suddenly and unexpectedly, possibly of “food poisoning.” I doubt it was the jab this time.

Drone research in Iran seems like a high-risk occupation.

🚀 The Daily Mail UK ran a story this week headlined, “More than HALF of Republicans say U.S. ‘Seems Headed’ Towards Another Civil War in the Near Future, New Poll Shows.”

The poll showed 44% of Americans generally, and a majority of Republicans (53%), think the US is “headed toward another civil war.” But before you get too concerned, the poll was conducted by the odious Southern Poverty Law Center, so who knows. The poll also included a bunch of race-baiting nonsense about so-called “replacement theory,” which I think is a euphemism for people worried about anti-white discrimination in government hiring practices.

SPLC thinks that you must be totally racist if you are concerned about anti-white discrimination in government hiring practices. So shut up, you replacer.

🚀 In an interview with Al Jazeera, which often seems more reliable than U.S. corporate media these days, Russian President Dmitry Medvedev warned, “This isn’t a forecast, but what’s already in play. The horsemen of the apocalypse are galloping ahead and we can only look towards Almighty God.”

7_SealsOfTheEnd @sealsoftheendRussian Security County Deputy Chairman Dmitry Medvedev said in a recent interview that “one can believe that the horsemen of the Apocalypse are already on their way and all hope is in Almighty God,” the Russian-state run news agency TASS reported. Russia warns of “horsemen of the Apocalypse” as Ukraine war hits 100 daysOne Russian official issued a warning that biblical figures mentioned in the book of Revelation are on their way.newsweek.comJune 4th 20222 Retweets4 Likes

🚀 Speaking of Horseman of the Apocalypse. Gizmodo ran a story yesterday headlined, “California’s Drought Is So Bad, It’s Going to Slash Hydropower.”

California is currently experiencing what local media calls a “mega drought.” It’s the worst drought in California history, EVER. Californians are already subject to tough water restrictions, with violators facing $2,000 fines. Now the state has announced that it has to start shutting down some of its 270 hydroelectric plants to save water.

So, it seems like California is also headed for power restrictions next. Here’s my hot take: the drought and power shortage have been created by idiotic government ecological regulations. Thanks, experts.

Have a wonderful weekend, and I’ll see you back here on Monday morning for more.

You can help get the truth out and spread optimism and hope: https://www.coffeeandcovid.com/p/-learn-how-to-get-involved-